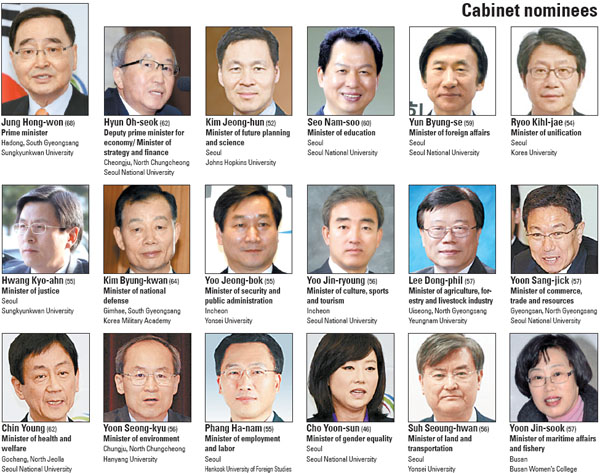 Park Geun-hye starts her five-year presidency amidst growing security threats in the region and a global economic slowdown that directly affects Korea’s economy.

Last week, her transition team made public a roadmap to realize her vision and goals as well as specific action plans for the new government that showed the challenges she will face.

The transition committee announced Thursday five major goals for the Park government. They were: Creating an innovative economy focused on job creation; offering targeted welfare and job programs; enriching lives with education and culture; creating a safe, united society; and establishing the foundation for an era of unification. 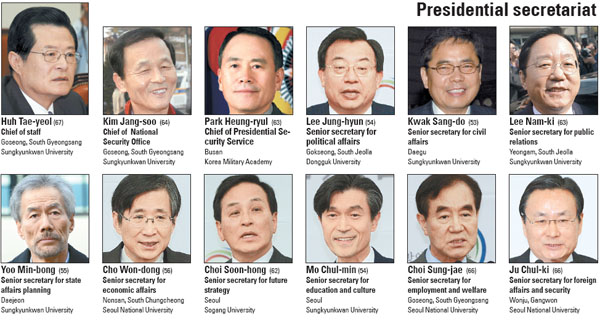 After her victory in December’s presidential election, concerns rose over whether she would be able to follow through on all of her promises, particularly broader spending on welfare. But the transition team made clear in the roadmap that the new government will try to realize them all.

Famous for trying to keep promises at all cost, Park said on Feb. 18 that she will push forward her pledges from the start of her presidency.

“I have seen many cases in the past that pledges were not implemented when the president loses momentum at the beginning of his term,” Park said. “We must tackle the issues with the determination to complete almost everything within the first three to six months.”

According to the transition team, 210 new or amended laws are needed to realize Park’s presidential pledges and her government plans to complete work on 80 percent of them before the end of this year.

Park also said her government will tackle the most difficult issues first. “That will create the path to this administration’ success,” she said.

Park has promised wider welfare benefits, which has prompted concerns that budgets in other fields, particularly defense, will be squeezed. But Park said last week that North Korea’s nuclear test on Feb. 12 has emerged as an unforeseen factor that requires Seoul to improve its defense.

To demonstrate its commitment to security, the Park administration decided to increase the defense budget at a rate higher than the increase in government spending as a whole.

“After Pyongyang’s third nuclear test, many supported the need to establish a ‘kill chain’ system to be able to preemptively strike the North’s missile launchers and nuclear facilities,” said Kim Jang-soo, a former defense minister appointed to head Park’s security team in the Blue House. “We must secure the budget for that even if we have to advance the spending schedule.”

Shortly after Park’s presidential victory, expectations were high that inter-Korean talks could be restarted. Park visited Pyongyang in 2002 and met with then-North Korean leader Kim Jong-il. She said during the campaign she would embark on trust-building measures with the North, calling the policy “trustpolitik.”

The Kim Jong-un regime’s long-range missile launch and third nuclear weapon test, however, put a serious damper on Park’s plan. While she appointed Yun Byung-se, who worked in the liberal Roh Moo-hyun Blue House, as her foreign minister, Park’s North Korea policy will likely put more emphasis on pressuring the North in response to the nuclear crisis. She has hard-liners in her government, including defense minister nominee Kim Byung-kwan and Kim Kwan-jin, the head of her national security “control tower.” Yun is known for his support for a strong alliance with the United States. Park’s unification minister nominee Ryoo Kihl-jae and her foreign affairs and security senior secretary appointee Ju Chul-ki are known as pragmatists who put priorities on stopping the North’s provocations.

With the worsened security conditions and expected budget problem, Park decided to postpone her pledge to cut mandatory military service for all Korean males from 21 months to 18 months. Her transition team said it will be treated as a long-term goal.

The Park government made clear its determination to follow through with the transfer of wartime operational control of the Korean military to Korea from the U.S. by 2015. The transfer was decided during the Roh Moo-hyun government with an initial deadline of 2012, but the timing was pushed back to 2015 during the Lee Myung-bak administration.

Under Park’s campaign of “grand national unity,” expectations were high that she will name to her cabinet and Blue House secretariat people from the liberal arena and the Jeolla region.

But only two out of the 18 members in her cabinet were from the Jeolla region, the traditional stronghold of the opposition.