In V-League, Leo says he has found a family

In V-League, Leo says he has found a family 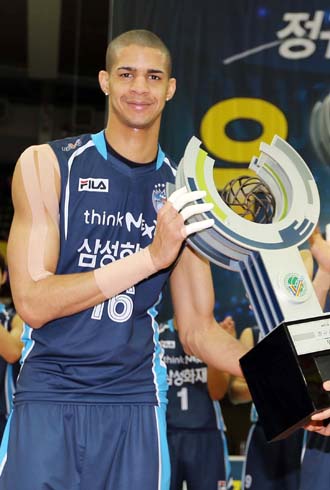 Leonardo Leyva Martinez, better known as Leo in Korea, holds the trophy after the Samsung Blue Fangs secured the 2012-13 regular season title for the V-League on Saturday. [NEWSIS]

Leonardo Leyva Martinez has quickly positioned himself as the new face of the Korean professional volleyball league, exhibiting power and height that only Gavin Schmitt, his predecessor at the Samsung Blue Fangs, could match.

His success in the league is a remarkable turn of events for a player who earned just $10 a month in Cuba four years ago.

Yearning to get out of poverty on the island nation and have his talent recognized, the former Cuban national team player sought asylum in Puerto Rico in 2009.

“I thought that it was time to make a decision,” Martinez, now 22, recalled through an interpreter in a recent interview with Ilgan Sports.

He then sat out for two years due to a required waiting period for Cuban asylum seekers but then jumped into a Puerto Rico squad.

He led Cariduros de Fajardo to victory in the Puerto Rican league for the 2011-12 season and was named Most Valuable Player that year.

Fakel Novy Urengoy, a Russian club, soon took interest in the 6-foot, 7-inch rising star, but it was the Blue Fangs in Korea that eventually snagged him, a move that Martinez himself called “a light of hope from the East.”

Samsung’s choice was met initially with worry that the little-known Cuban would not be able to fill the big hole left by Schmitt, who led the team into championships every year during his three-year stint.

But Martinez answered the cynicism with powerful, towering and precise spiking from the start.

He scored 810 points in 25 games, far ahead of Mitja Gasparini of Slovenia, who had 647 points in 26 games. He is also leading the league in success rate for offense with 59.11 percent.

It managed to secure the title even though five games remain in the season, the highest number ever.

Now many call Samsung the team of “Leo,” as Martinez is known in Korea.

Still, he has been humble and credited the win to teamwork rather than the efforts of any one player.

“It was not that Samsung won the season thanks to a foreign player,” Martinez said, “but that I could grow into the best foreign player because I could play at Samsung.

“A talented player brings success, but it is the players’ blood and sweat that are cultivating a victory. And that is the strong point for the Team Samsung.”

Samsung manager Shin Chi-yong said that he was impressed by Martinez’s sense of responsibility, which he sees as a valuable asset for the team.

Martinez is married to a Puerto Rican woman, and the couple lives with their two sons in an apartment adjacent to the training center for the team in Yongin, Gyeonggi.

“He is responsible as the head of a family despite his young age,” Shin said. “Looking at his family, he thinks he has to work harder.”

His mother is another driving force behind his success.

Last month, he reunited with his mother, whom the team invited from Cuba, which recently eased restriction on overseas travel for its citizens.

“My mom is my role model,” Martinez said.

“She said when I was young ‘Endure today, think of the future.’ I want to show her that I am succeeding.”

He is already a shining figure in Korea, but Martinez said that he will not let up until he achieves even more.

Once the regular season is over, the Blue Fangs will seek a seventh championship title overall and sixth straight win in the playoffs.

The team will play against the winner of the playoff game between the second- and third-place teams beginning March 24.

“I feel something like love of family in Korea and with Samsung Blue Fangs,” Martinez said, adding that the manager once jokingly suggested that he become his foster son.

“I want to win the championship for another family of mine,” Martinez said.