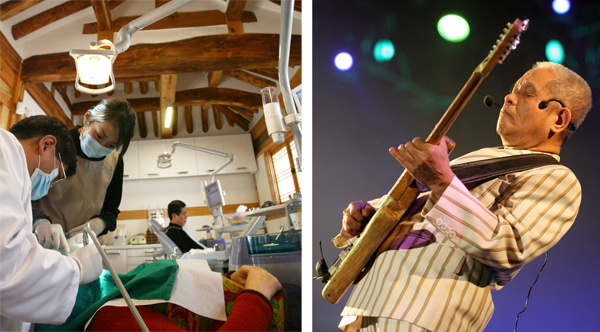 Sometimes, bosses from London ask me, “What is the zeitgeist in Korea?” I’ve always been a touch skeptical about the idea of a zeitgeist. Especially in the international media, people like to wrap a whole country up in a neat package of “now.” Are all Koreans surfing on a wave of “Gangnam Style” confidence? Or are they all crying out for “economic democratization?”

Subtlety is a difficult trick to achieve when viewing a country from afar. A tendency is extrapolated to cover the whole population. That is why, as an Englishman, I am simultaneously a gentleman and a football hooligan and a consumer of endless cups of tea (probably only one of those is true in my case).

So if I had to answer the zeitgeist question, I would probably say that there isn’t one. But there is a certain long-term trend that really stands out, I think: nostalgia. The outside view of Korea is that this is a place devoted to the future, constantly upgrading its broadband speed, and erecting taller and shinier buildings. This has plenty of truth of course - it is practically a crime not to possess a smartphone here and, indeed, dreadfully “old-fashioned” (I’d love to write an essay on that word itself) - but I feel that more and more, Korea is looking to the near and far past with affection.

An architect friend of mine tells me that when he learned his craft in the 1980s, the hanok - Korea’s traditional house - was simply a rustic relic, an object of curiosity. Now, the artsy and the wealthy cannot get enough of them. They want modernized versions, but retain a romanticized yearning for at least the idea of the houses of their grandparents. Galleries are full of traditional folk paintings and cloth wrapper exhibitions, which makes a welcome change from the Western contemporary trend-following we’re so used to seeing.

“Answer, 1997!” would make a good pop culture example. And similarly, bars playing old Korean chart music are springing up all over the place. It reminds me of something called “School Disco,” a music night beloved of thirty- and forty-somethings in the U.K., where people wear old school jackets and ties and dance to Wham. So though I cannot experience the same giddy childhood joy as other patrons when, say, once-popular singer Nami’s “Bingle Bingle” comes on, their reaction is one to which I can relate.

In December, I attended a concert by Shin Joong-hyun, Korea’s legendary rocker who knew how to mix the vibrant music genre with the deep Korean psyche. I had interviewed him for a book I wrote, and he very kindly sent me some tickets. I can remember him telling me that people had lost interest in his music by the 1980s. On the evening of the show though, there was obviously a lot of love for him and his songs. And rightly so, because he was fantastic.

The general view on nostalgia where I come from is that it is bad. This is because the British mostly see the past as a better place than the future. Our country is never going to be as important as it used to be, and nobody is ever going to be as good as The Beatles. Those are facts. Admitting them, though, is awkward.

But things are different in Korea. It often made me sad to see how little reverence people here had for the past. The way in which old things have been discarded - architecture, music, art and so on - may have been understandable in the context of a country trying to forget its history and develop as quickly as possible. But the modernize-at-all-costs orientation is hard to control. Things get thrown away that never should have been.

That forward motion was also accompanied by an unquestioning love of anything from foreign countries - as long as those countries could be classed as “advanced nations.” The rush to be modern and “global” may look like strength, but seen in another way, it contains too much weakness. So to me, a new appreciation of old Korean things is a positive phenomenon. It is a sign of progress and confidence.

In the days before I caved in and upgraded to a smartphone, a small boy walking past me once pointed out my old LG feature phone to his mother - “Mommy. What an outmoded phone it is! Ha ha,” he said. I couldn’t help but laugh. I was such a dinosaur, in having a two-year-old phone rather than that week’s coolest new model. Whatever the zeitgeist is, I was clearly behind it at that point in time. But the zeitgeist is overrated, unless it looks backward as well as forward.

*The author is the Seoul correspondent for The Economist.