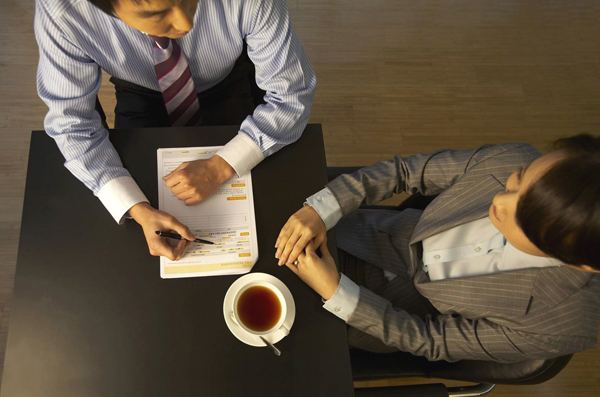 An adviser talks to a customer about tax-saving products at a bank in Seoul. A revised income tax law that lowers the base for taxable income from financial investments to 20 million won (

Since a revised law that halves the base for taxable income from financial investments - including interest - to 20 million won ($18,450) from 40 million won took effect Jan. 1, market observers say affluent households have been busy moving assets to tax exempt products.

A Feb. 5 seminar on the revised income tax law prepared by Shinhan Bank at Korea Exchange in Yeouido, central Seoul, was packed with 150 VIP customers looking for tips about avoiding “a tax bomb” and wise management of their financial assets.

“In an era of low interest rates, the No.1 priority for investors is how well they can legally save on taxes,” said a speaker. “Find tax exemption products and carefully specify payment dates of interest earnings and stock dividends to minimize tax liability.”

Market observers said financial institutions are already in heated competition to attract money. Shinhan, for example, kicked off seminars at 37 locations including Seoul, Busan and Gwangju in February to attract rich investors to its tax exemption products.

During January and February, a combined 10 trillion won flowed into such products.

Of that, 6 trillion won went into insurance firms’ financial products, such as immediate annuities and savings-linked insurance, and the remaining 4 trillion won to banks, mutual credit funds, brokerage firms where investing in oil funds, Brazilian government bonds, and equity-linked securities.

“Before the revised financial income tax law came into effect, there were still many wealthy customers who preferred to manage their assets by simply putting them in savings accounts,” said a private banker surnamed Kim who manages the portfolios of bank customers with deposits of more than 100 million won at a bank in Jamsil, southern Seoul. “Now they want to take this money out and invest in immediate annuities and bonds in which they have little knowledge. We get flood of inquiries from customers and I sometimes have to sacrifice my lunch hour to give advice.”

The Korea Insurance Research Institute said the revised financial income tax law will affect at least 200,000 people and the government is expected to receive 7.3 trillion won in tax revenue over the next five years.

“About 20 trillion won in savings accounts at banks and bonds are estimated to migrate to tax exemption products at brokerage and insurance firms this year,” said Kim Se-joong, a research fellow at the institute. “Instead of betting on risky investment instruments, such as equity-linked funds, people are likely to move their money to safe havens that give tax benefits, as these days they seem to care more about tax benefits than annual earning rates.”

According to Kim, life insurers’ savings-linked insurance is a popular destination they will be tax exempt for 10 years while policy subscribers pay insurance fees.

“Inflation-indexed bonds are also eligible for tax breaks,” Kim said. “Brazilian government bonds are another good option as tax on interest income is exempted due to a Korea-Brazil tax treaty.”

Park Hyeon-cheol, a 53-year-old entrepreneur in Hannam-dong, southern Seoul, had his money at savings banks that offered higher interest than other lenders. But as the interest gap between savings banks and bigger banks neared zero, Park pulled out 300 million won in January.

“Interest rates at savings banks dropped by 1.5 percentage points compared to a year ago,” he said. “There’s no incentive to put money in savings banks anymore, and I’m considering moving the money to inflation-indexed bonds and immediate annuities.”

Meanwhile, market observers raised concerns that the gap in investment income between the wealthy and everyone else will widen because typical households have little knowledge of tax exemption programs and aren’t eligible for investment consulting from private bankers.

To get tax breaks, they advise individual investors to sign up for property accumulation savings, which will be revived in the local financial market next month.

A salaried worker with less than 50 million won in annual income and business owners with 35 million won in business income are eligible for property accumulation savings accounts. Account holders will get tax breaks when they deposit up to 12 million won per year in the account for more than seven years.