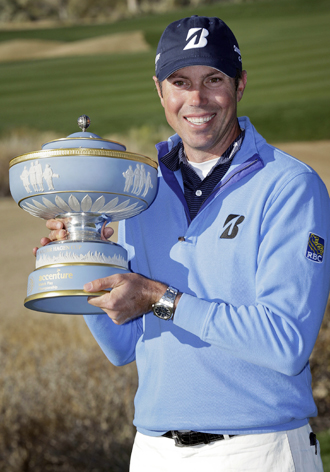 Matt Kuchar holds up the Walter Hagen Cup after defeating Hunter Mahan 2 and 1 in the final round of play during the Match Play Championship golf tournament on Sunday in Marana, Arizona. [AP/NEWSIS]

MARANA, Arizona - Matt Kuchar finally put Hunter Mahan in a hole and then answered every challenge Sunday to win the Match Play Championship.

Mahan had gone 169 holes over 11 matches without trailing in this wild tournament until Kuchar won the fourth hole of their championship match with a par, and Mahan never caught up. Kuchar took advantage of a series of miscues to build a 4-up lead at the turn, and then held off a noble challenge by the defending champion.

There was never a dull moment on the back nine. Only two holes were halved, and those were with birdies.

But for all the great shots, the match ended when Mahan went from a tough lie in the bunker to a bush in the desert, and it took him four shots to reach the 17th green. Kuchar wound up winning, 2 and 1, when Mahan removed the stocking cap he used to fight the cold desert air and conceded Kuchar a short birdie putt.

It was the first World Golf Championship title for Kuchar, and it follows a year in which he won The Players Championship. Kuchar became the second player in the last three years to win the Match Play Championship without ever playing the 18th hole.

Mahan was trying to join Tiger Woods as the only back-to-back winners, and he gave it a good shot despite the big deficit halfway through the match.

In a strong, cold wind - the wind chill index reached a low of 37 degrees on the final day - Mahan made a long two-putt par to win the 10th, and played a tough chip from the mound of a bunker to about six feet for a birdie on the next hole, cutting the lead in half.

Mahan followed with a tee shot into about 10 feet on the par-3 12th, the momentum squarely on his side.

Kuchar, however, followed with a tee shot to just inside 15 feet and made the birdie putt. On the par-5 13th, Mahan hit a poor approach from the fairway and Kuchar got up-and-down to restore his lead to 3 up.

Kuchar came up with one more clutch shot. With a 2-up lead on the 304-yard 15th hole, the breeze at his back, Kuchar chipped about 10 feet past the hole with Mahan only six feet away for birdie. Kuchar holed the putt and escaped with a halve.

Mahan won the 16th with a two-putt par when Kuchar’s tee shot bounced off the corporate tents behind the green, and it looked as though the match would go down the 18th for the first time in nine matches for Kuchar. Both hit into the fairway bunker, but Mahan’s ball was slightly sunk in the sand, and his approach never came close to reaching the green. Instead, it rolled through a patch of desert until it lodged in a bush.

Kuchar’s record in this event improved to 15-3, the highest winning percentage of anyone who has played at least 10 matches. He has reached the quarterfinals each of the last three years, and this time went all the way.

He played 96 holes and only trailed after four holes all week.

Kuchar polished off Jason Day of Australia in the semifinals Saturday morning, 4 and 3.

Mahan hit a series of remarkable wedge shots in beating Ian Poulter, 4 and 3, in his semifinal. He twice hit difficult chips inside 5 feet to win holes. AP