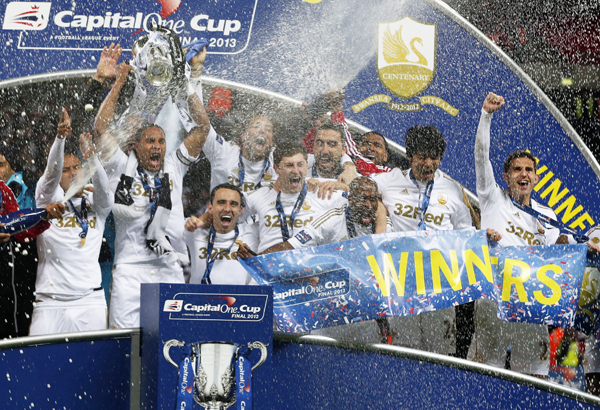 LONDON - Swansea denied Bradford the perfect end to its fairy-tale run in the League Cup by thrashing the fourth-tier club 5-0 in the final, capping its centenary season with a first major trophy.

Manchester City hasn’t given up on winning silverware this year, either, after reviving its faint Premier League title hopes with a 2-0 win over Chelsea. The champions stayed 12 points behind Manchester United.

While City needed second-half goals by Yaya Toure and Carlos Tevez to wear down the European champions, Swansea’s victory at Wembley Stadium was never really in doubt from the moment Nathan Dyer scored the 16th-minute opener.

Dyer and Jonathan de Guzman both finished with two goals and Michu grabbed the other in the largest winning margin in the final of English football’s second-tier knockout competition. Swansea will play in the Europa League next season.

Swansea City manager Michael Laudrup said winning the League Cup final on Sunday ranked amongst his proudest moments because they are such a small club compared to the European giants he once played for.

The 48-year-old former Danish international, in his first season as Swansea manager, steered the Welsh club to a comprehensive 5-0 win over fourth-tier Bradford City which guarantees them a place in the Europa League next season.

Wembley is clearly a lucky ground for Laudrup as he won here playing for Denmark against England in 1983 and lifted the European Cup at the famous stadium with Barcelona in 1992.

“So it’s third time lucky for me at Wembley,” he told reporters. “But I don’t think I can compare this title today with something I have done before, for the simple reason that its one thing to win when you are playing for Barcelona or Juventus, but to win it with a smaller club is absolutely fantastic.

“It is Swansea’s first major trophy ever and to win it in this, the centenary season, is up there with the best things I have done because it is completely different.”

Laudrup won league titles with Real Madrid, Barcelona, Ajax Amsterdam and Juventus and was voted Denmark’s Best Ever Player after his career ended.

The lowly Bantams, a Premier League club at the turn of the millennium, became the first team from the fourth tier of English soccer to reach a final since Rochdale in 1962 and the first to play in an FA Cup or League Cup final at Wembley.

Bradford was looking to add the Welsh club to a list of Premier League conquests that already included Arsenal, Aston Villa and Wigan in its unprecedented run to the final.

However, the team currently ranked 79th in English football’s league pyramid was blown away by Swansea’s renowned passing game, with goalkeeper Matt Duke’s straight red card for tripping De Guzman in the 56th summing up their day.