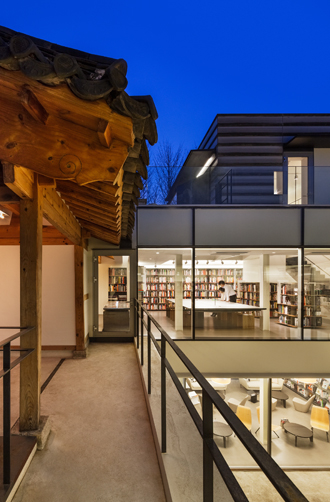 Hyundai Card, known for its innovative marketing that combines art and finance, has wowed customers again by opening a library filled with 11,500 design books that are hard to obtain in Korea.

Some 30 invited cardholders gathered at the facility’s first special lecture on Sunday evening to celebrate the Feb. 12 opening. Hyundai’s branding expertise was on display during remarks by Cecilia Dean, co-founder of Visionaire, a fashion and art publisher. The New York-based company has worked with artists including Karl Lagerfeld, Marc Jacobs, Kate Moss and Yoko Ono as well as brands like Louis Vuitton to create multiformat fashion and art albums, and its founder was praising Hyundai.

“Creativity and finance often seem separate, but Hyundai Card seems to bring these two things together,” Dean said in an interview with the Korea JoongAng Daily after the lecture. “Obviously, credit card is only about money. That is the business. And to be able to leverage that and do something that’s educational that spreads a message and education and different ways of saying things to [credit card] members is really abnormal. But it’s also very smart marketing. It’s a win-win situation [for Hyundai Card and members]. I don’t think there’s anything like that in the United States.”

“Around 300 people visit the Design Library on the weekend, and 150 people come on a weekday,” said Heo Yun-jeong, a publicist at Hyundai Card. “The exhibition ‘Visionaire X Hyundai Card,’ which displays 49 out of 62 albums produced by Visionaire, runs through April 14. We plan to hold about six exhibitions under different themes every year where Hyundai Card members can have exclusive creative experiences.”

Market observers said the library reflects the creative management philosophy of Hyundai Card CEO Ted Chung, who led the company on one of the most successful turnarounds in Korean history.

Chung, now known as an icon of innovation, took the company’s brand awareness to the next level by spending lavishly on style, art, fashion and sports promotion campaigns while also focusing on providing high-quality service.

He grew Hyundai Card’s market share in the country to 13.1 percent as of Q3 in 2012 from 1.8 percent in 2001 when Hyundai Motor Group’s Hyundai Capital entered the card business after taking over debt-ridden Diners Club Korea.

Hyundai Card is now running neck-and-neck with No. 2 player Samsung when it comes to credit card purchases.

Given the success of its unique marketing strategy, the company has already organized a series of cultural promotion campaigns this year.

Under the heading “Super,” Hyundai arranged a concert with the Chicago Symphony Orchestra most recently on Feb. 6 and 7 as well as concerts by Eminem and Lady Gaga in 2012. An art exhibition by Tim Burton runs through April 14.

“Hyundai Card is known for its innovative management, and its recent opening of a library dedicated to design books came as another shock in the entire credit card industry as it was something unexpected,” said an employee at a local credit card firm. “Although Hyundai is our competitor, the company deserves credit for leading consumer culture in a way that used to be unthinkable in this industry.”