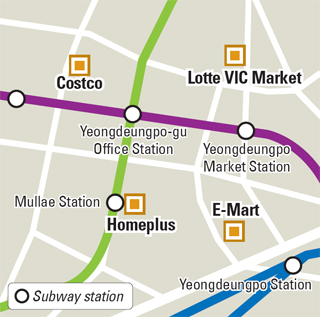 Lotte will take on Costco by rolling out its own warehouse stores in neighborhoods where the U.S. retail is established.

Warehouse-type discount stores sell large quantities of goods at 20 percent to 30 percent less than retail at a low margin of profit.

The VIC Market in Yeongdeungpo is 1 kilometer (0.62 mile) away from Costco’s Yangpyeong store in southwestern Seoul.

“As we tried to attract customers who are familiar with warehouse-type discount stores, we opened the VIC Market outlets near Costcos,” said a spokesman for Lotte Mart.

Last July, when the VIC Market in Geumcheon opened 5.5 kilometers away from Costco’s Yangpyeong store, the two companies engaged in a fierce price competition.

At the VIC Market in Yeongdeungpo, Lotte has added a variety of amenities, including a 462-square-meter cultural center that will offer free lectures and a professional pet shop.

The VIC Markets in both Yeongdeungpo and Dobong stores will have Kid’s Cafes, pharmacies, photo studios and optical shops and services.

Lotte also will offer some upscale products, such as Fendi sunglasses at 79,000 won, a discount of about 65 percent from retail.

“By taking advantage of our know-how from operating Lotte Mart and VIC Market, we will prove our competitiveness in the area membership discount stores,” said Choi Chun-seok, product general manager at Lotte Mart.