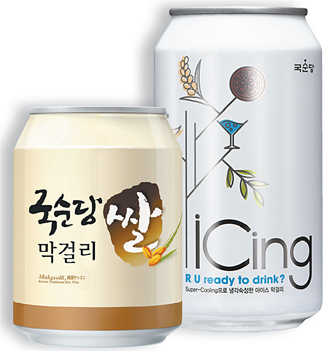 Makgeolli (Korean rice wine) has landed at the VIP lounge of Singapore Airlines.

This will be the first time makgeolli will be served in the lounge of foreign airlines, according to Kooksoondang.

Industry insiders said the popularity of makgeolli is on the rise in Asian countries like Singapore, Malaysia and Thailand, where there is a taste for traditional beverages.

“This is an important way for our makgeolli to be introduced all over the world,” an official from the company said. “With this opportunity, we will work to make makgeolli the world’s beloved drink.”

The brewer said its product will be served free at the SilverKris lounge, which opened last Monday and is available to first and business class passengers and members.

Kooksoongdang is the first company to offer makgeolli to airlines. The drink was introduced on Asiana Airlines’ Korea-Japan routes in October 2009 and is now available on all Asiana flights.

Kooksoondang said its rice makgeolli will appeal to foreign customers as it is served in a can, while its Icing, which contains grapefruit juice, can also attract younger customers with an alcohol content (4 percent) less than that of other makgeolli (6 percent).