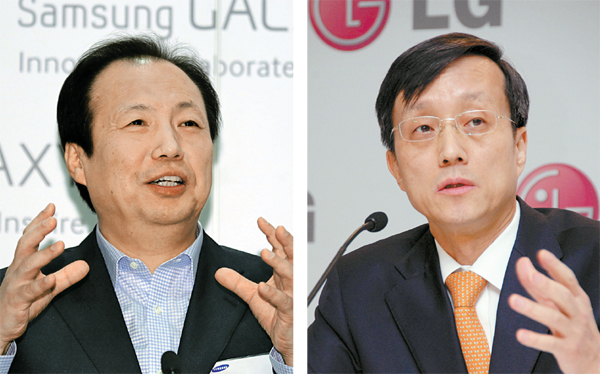 Samsung Electronics has a goal of to doubling its tablet computer sales this year with its Galaxy Note 8.0 device, the company’s mobile business chief said Sunday.

“The tablet PC market is expected to grow 50 percent compared with last year. Samsung aims to double its sales and focus on the tablet PC market,” said J.K. Shin, head of Samsung’s IT & Mobile Communications division, at the annual Mobile World Congress in Barcelona.

His remarks come as Samsung is ramping up efforts to boost its presence in the global tablet PC market that is largely dominated by Apple’s iPads.

Given that Samsung’s 2012 tablet PC sales reached 17.7 million units, according to an estimate by market researcher IDC, the company’s sales target for this year is likely to exceed 30 million units.

Meanwhile, the mobile business chief said Samsung plans to focus on the business-to-business segment as a growing number of companies are adopting smart devices.

The mobile business chief also confirmed that Samsung is set to unveil the Galaxy S4 at a New York event March 14.

LG Electronics intends to boost smartphone shipments 52 percent this year after a shift away from basic devices ended a streak of two straight annual losses at its phone-making division.

The company plans to sell 40 million smartphones this year, helped by rising demand in emerging markets, Park Jong-seok, head of its mobile-communications division, said ahead of the Mobile World Congress, which started yesterday in Barcelona. LG sold 26.3 million smartphones last year and 20.2 million in 2011.

Korea’s No. 2 phone-maker will roll out the upgraded Optimus G Pro in overseas markets this year as it seeks to lure buyers from Apple’s iPhone and Samsung Electronics’ Galaxy lineup. The Seoul-based company is turning more toward the premium sector after its total phone sales halved in two years amid slowing demand for basic models competing with handsets from Chinese manufacturers led by ZTE.

“LG’s brand image in the premium league has improved,” said Kim Ki-young, an analyst at Seoul-based LIG Investment & Securities. “The company also seems to have higher growth potential than HTC and BlackBerry.”

Smartphones accounted for more than 50 percent of LG’s phone shipments for the first time in the fourth quarter of 2012. The phone division posted an operating profit of 58.6 billion won last year.

“The developed markets are becoming ever more saturated,” Park said. “In the smartphone area, we definitely felt the need to diversify our business portfolio.”