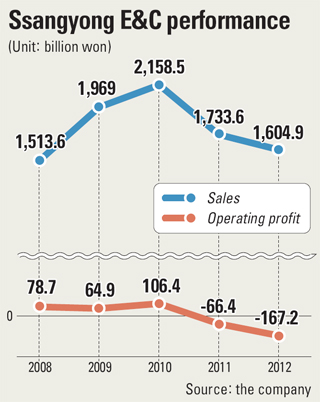 Ssangyong Engineering & Construction will file for a debt workout program this week in a bid to revive its business.

The builder is also at risk of stock market delisting. The Korea Exchange suspended trading of Ssangyong E&C shares earlier this month, citing capital erosion. If it cannot resolve its insufficient cash problem by April 1, the company will be forced out of the Korea Securities Dealers Automated Quotation, or Kosdaq.

“We have so little time left to avoid bankruptcy and delisting,” said a Ssangyong E&C official. “It seems a workout program is inevitable.” 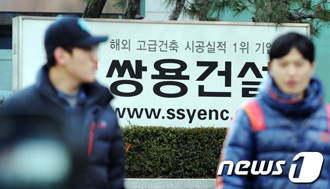 If its workout application is approved by 75 percent of creditors, it will be the second time that the builder has needed such a program.

Ssangyong E&C entered a workout after the 1998 Asian financial crisis and completed the program in October 2004.

State-run Korea Asset Management Corporation (Kamco), which had been the largest shareholder since government money was injected in 1998, had tried to sell the company six times since 2007. Industry insiders say Kamco set the asking price too high.

Ssangyong E&C has been collecting most of its revenues from high-tech construction projects overseas. The company, which built Singapore’s Marina Bay Sands Hotel, earned 300 billion won abroad in the past three years and 180 billion in net profit. In Korea, however, the company has been plagued by unsold apartments and difficulty in financing projects.

The plan to revive Ssangyong E&C has been stalled by a dispute between creditors and Kamco.

When its management period expired, Kamco returned its 38.75 percent stake to the Financial Services Commission last Friday. The FSC will allocate those shares to 23 creditor financial institutions.

The creditors had been asking Kamco to support Ssangyong E&C by buying about 70 billion won in asset-backed commercial paper or a debt-equity swap, saying they would not consider financial assistance unless Kamco agreed.

However, sources said creditors will eventually accept a workout program to avoid bankruptcy.

“Some creditors are raising questions about the workout program, but no one wants see Ssangyong E&C go out of business,” said an official from a creditor bank. “In the end, it will avoid bankruptcy and court receivership.”

Industry observers said bankruptcy would have a huge impact, as Ssangyong E&C is currently working at 130 sites with 1,400 other companies in Korea and operating 3 trillion won worth of projects overseas at 17 construction sites.

Meanwhile, Ssangyong said it hopes Chairman Kim Suk-joon will remain in his position. Before stepping down as the largest shareholder, Kamco issued an official document discharging Kim.

“The value of projects that we are currently negotiating overseas is about 19 trillion won, and Kim has been playing an important role,” said a company spokesman