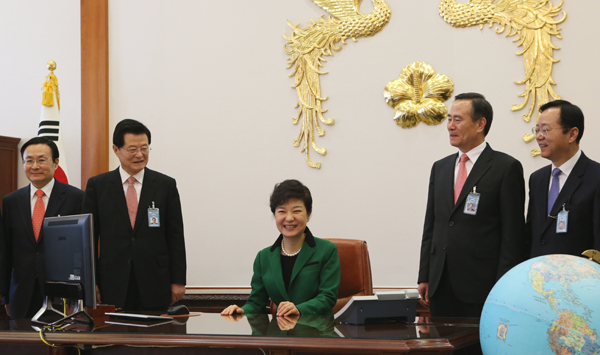 President Park Geun-hye flashes a smile at her new desk in the Blue House while her aides stand by as they begin official work yesterday. [YONHAP]

Park Geun-hye’s first day as president was dominated by pomp and ceremony. But going forward, she will have to work with the prime minister and ministers of the cabinet of predecessor Lee Myung-bak as a series of bills to restructure the government according to her plan remained deadlocked in the legislature.

The National Assembly will have a voting session today but the restructuring plans will probably not come up as the ruling and opposition parties remain deadlocked.

While the ruling party supports Park’s plan, the DUP disagreed on who should control the policy on media. Park wants to allow the Korea Communications Commission to regulate the major broadcasters and cable networks while handing over authority on other media including the Internet and satellite TV to the new ministry of future planning and science.

The DUP said broadcasting control must stay with the Korea Communications Commission to ensure fairness and integrity of the industry.

The DUP also disagrees with Park’s plan to transfer trade affairs from the foreign ministry to the commerce ministry.

Since a series of bills on the restructuring was submitted to the National Assembly on Jan. 30, no progress has been made to approve them. Saenuri Chairman Hwang Woo-yea held a press conference Sunday and asked the DUP to cooperate with the government plan, but no breakthrough was made as of yesterday afternoon.

Despite the deadlock, speculation grew yesterday that the motion to confirm Jung Hong-won as Park’s first prime minister will likely be passed at the legislature today. Jung was vetted at confirmation hearings last week, but the DUP did not immediately approve the hearing report, effectively delaying the process.

Park made public her nominees earlier this month, even before the legislature approved the government restructuring, and the move enraged the DUP.

The DUP particularly vowed to kill the nomination of Kim Byung-kwan as defense minister. Kim’s confirmation hearing will take place on March 6.