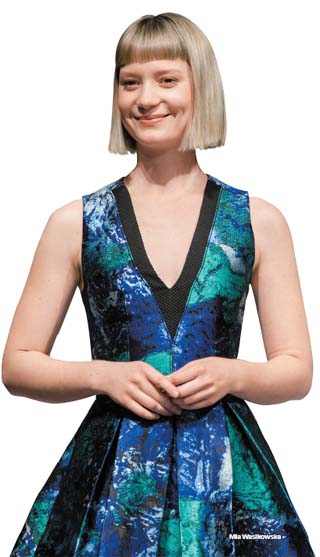 From a free-spirited daughter of lesbian parents in “The Kids Are All Right” to a suicidal teenage gymnast in HBO’s “In Treatment,” Mia Wasikowska’s characters are anything but conventional.

“She was quite different compared to any other characters that I’ve played,” Wasikowska said in an interview with the Korea JoongAng Daily. “Certain parts of her were very internal, more an observer than a participant and isolated from her peers for a very long time.”

“I was also intrigued by these other sides of characters that I don’t understand,” she added. “Not as universal themes, loneliness and isolation or desire but more particular to who India is.” 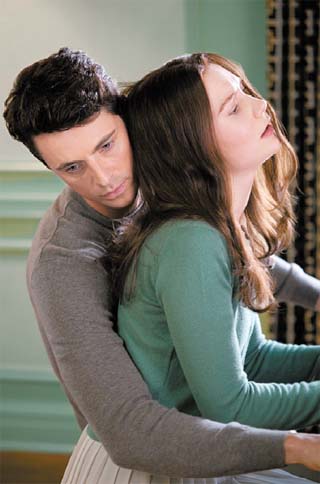 Mia Wasikowska says she was drawn to the character India in “Stoker” as she has never played a woman who undergoes such an intense sexual and emotional transition. Provided by Fox Searchlight Pictures

On the brink of womanhood, the lead’s emotional and sexual repression is revealed as she meets her uncle for the first time.

The transition from childhood to adulthood often involves emotionally intense experiences, and this was exactly the case for India, who had emotions even more visceral than her peers.

Wasikowska had to act in an array of intense scenes including an erotically charged piano duet that leaves her panting, India sharpening the blood-soaked pencil she just used as a weapon against bullies and a dramatic shower scene that depicts a pivotal moment in her physical maturation after a gruesome event.

“Some of those scenes were certainly challenging, and I was nervous before shooting,” the actress said. “But I had so much trust for director Park and the other actors so I felt comfortable while filming.”

In the Gothic drama, the Aussie actress manages tension with heavy-hitting co-stars including Goode and Nicole Kidman. Charlie and India play an endlessly fascinating game of cat and mouse in the house while the teenage girl keeps a distance from her mother (Kidman).

“It was sort of surprising to me that it was quite easy to come in and out of the intensity of those scenes because when the film is so intense and in such a strong tone, it is almost quite necessary to get out of it and have fun in between things,” Wasikowska said. “Everybody is naturally silly in between for the purpose of being silly.”

The actress also took note of Park’s attention to detail when portraying complicated characters like India.

“Me and director Park, for a couple of weeks before we started filming, exchanged images by e-mail. The images express either the physical side of India or emotional side of India. We looked at a lot of pictures to make sure that we were on the same page and saw her in the same way,” she said.

“He is very meticulous. The director tries to give a sense of characters by using storyboards and visual references, which helped me understand the main character.”

Having worked with such acclaimed directors as Tim Burton in box-office smash hit “Alice in Wonderland” and Gus Van Sant in “Restless,” the humble actress considers herself lucky to learn from directors who have strong visions.

“I am not really sure why they picked me, but I was lucky to be chosen by them. I definitely know why I like their films. It’s always ideal to work with directors who have a strong vision and are able to enhance the strength in the characters,” Wasikowska said.

In previous works, the 24-year-old often appeared as a teenage girl, and she still said that performing as a teenager was not hard in Park’s film even though she is now in her twenties.

“Teenage still feels very close to me. I think maybe it’s true for most people that they never feel quite as old as they actually are. It was not too hard to remember acting as an 18-year-old.”

Regarding her first visit to Korea, she said she felt it was “surreal.”

“We talked about it in the first meeting two years ago,” she said. “So, I always hoped that we would get to this point where we are in Korea. Suddenly it’s happened very quick. I’ve only been with director Park in America. It is really nice to see him at home and also lovely to see how well-loved he is here.”

She also mentioned other Korean directors’ Hollywood debuts. For instance, Kim Jee-woon made his Hollywood debut with action thriller “The Last Stand” and Bong Joon-ho’s “Snowpiercer” is slated to be released during the summer.

“I am definitely aware of an increasing interest in Korean cinema in America,” she said. “Everybody is really excited about directors Park and Bong. They are sort of hot property at the moment.

“I always have nosy producers asking me how it is like to work with him. What’s always good is a strong perspective and different perspective, and I think Korean directors have that.”

Even after playing a wide range of challenging characters, Wasikowska still appears to be seeking something new and willing to challenge herself by taking up the new roles.

“I really want to do just a very different thing,” she said. “I keep playing characters different from ones that I played before. As much as possible, I want to work with different directors. It’s always really interesting to see different ways of achieving their visions.

“Most specifically, I want to do comedy films because I’ve never done them before.”