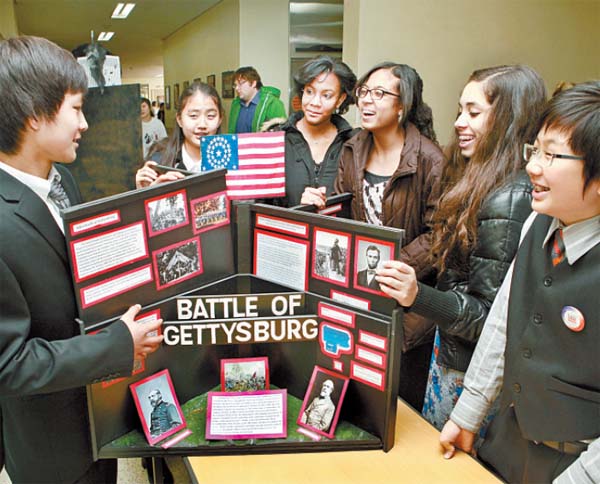 A young democratic activist falls to the ground at the sound of gunfire. As two other protesters try to help, a soldier stands over them with a pistol in his hand.

The scene did not happen on a city street, rather it was on the stage of the auditorium at Seoul International School. Part of an original play titled “Gwangju Democracy Movement: Stepping Stone to Liberty,” the protesters and soldiers were among 300 middle and high school students representing 12 international schools, who participated in a National History Day competition Saturday.

“Seoul International School this year is hosting the event, which first began in Korea last year,” said Tony Hurt, affiliate coordinator of the Korea event and a teacher at SIS. “National History Day is a highly regarded academic program and competition.”

In a hallway at the school where exhibits were on display, replicas of the World Trade Center Twin Towers that two hijacked planes crashed into in New York attracted the attention of visitors and participants alike.

Among other noteworthy displays was an exhibit by Danny Berdine of Seoul American Middle School on the Battle of Gettysburg during the American Civil War.

“I chose Gettysburg because my father was deeply interested in the Civil War and always told me about it,” said the 13-year-old.

The scope and quality of the presentations were impressive. “Some of the works submitted are at a college level,” said Hurt.

One such effort was a research paper titled “Gorbachev’s Foreign Policy: Glasnost and Its Influence,” by Eugene Yang, a 10th grader at SIS.

“It took me about five months in total to do the research and writing,” said Yang, who was awarded second place in the research paper category.

Attending the competition was Cathy Gorn, executive director of National History Day and an adjunct professor at the University of Maryland at College Park.

She expressed her amazement at the quality of submitted work, especially considering that this was only the second year for the National History Day competition in Korea.

“I have found it remarkable how fast it came together this year,” said Gorn. “It’s one of the fastest growing programs I have seen by any standard.”

The NHD director added that studying the past gives students an “opportunity to learn right from wrong [and] an opportunity to find their heroes and role models.”

The top two winners in each category graded by international school teachers will advance to the finals at the University of Maryland near Washington in June.