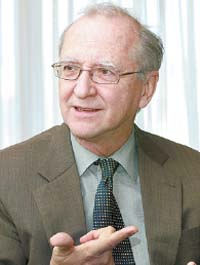 Jorg Alois Reding, the new Swiss ambassador to Korea, said his country wants to focus on research and engineering in developing stronger relations with Korea.

“This year, we expect at least three ministers to come to Korea, and the first one coming is the minister of economy, science and research in July,” the ambassador said in an interview with the Korea JoongAng Daily at his residence in central Seoul on Feb. 7.

“He is very interested in having a close relationship with Korea in innovation and research sectors. He will be with a delegation of people who are top [officials] of Swiss universities in the science side, particularly,” the ambassador said. “They will visit local universities in Korea, such as Kaist. That’s the main focus of this delegation.”

With degrees in international economics and developing countries, the 62-year-old ambassador has been the Swiss-side chairman on bilateral economic commissions and has been to over 130 countries either leading trade missions or travelling.

He also led the free trade negotiations between his country and Korea.

“I was the president of the Swiss-Korean official economic delegation,” he said.

“They came here in 2002 and discussed trade issues. Then, three years later, Korea agreed, and we concluded within a very short period of time, in 2005. We signed the free trade agreement with Korea.”

The ambassador’s first visit to Korea was 39 years ago. In 1974, he said he was invited here by the local branch of a global student group.

“I was invited by a member of the committee here and I stayed for two weeks with his family,” he said.

“The family lived in a nice house, running a small factory producing small pots and pans,” he said. “What comes to mind most is my nice Korean family. They showed me a lot of heritage here.”

The ambassador said one of his main goals during his term will be boosting relations between the two countries in research and engineering.

“We want Korean companies to go to Switzerland and look at Switzerland with the possibility of setting up an office there,” he said. “It’s because of two things - Switzerland is one of the world’s top countries in innovation and research. We have very prestigious engineering and strong pharmaceutical companies. Also, Switzerland also has the highest number of Nobel Prize winners in Europe.

“We want Korean companies to take advantage of this, and cooperate with these research centers in Switzerland,” he said. “We would like to have this very close economic interaction bring people together.”

Switzerland’s success in research and development and other high-end industries stems from its small- and medium-sized enterprises, the ambassador said.

“In Switzerland, over 90 percent of companies are small- and medium-sized companies,” he said. “They also do a lot of research.”

He said that’s possible because of the country’s dual education system, which doesn’t solely focus on getting a university education.

“We have only about 30 to 40 percent of students who go to university, and all the rest, the majority, they go to the professional schools,” he said. “These people like to make something by themselves and a lot of them are entrepreneurs.”

One of the main tasks that the ambassador will have to deal with is the his country’s participation in the 60th anniversary of Korea’s armistice agreement this year. Since the Korean War ended in a cease-fire in 1953, Switzerland has been a member of the Neutral Nations Supervisory Commission, with troops stationed at the inter-Korean border village of Panmunjom.

“It’s been the longest for Switzerland to have an army abroad,” the ambassador said. “However, in Switzerland, the engagement in Korea has never been criticized and never in doubt. Swiss people find this is a very good thing for Switzerland and international peace and for having closer ties with Korea.”

“The head of the Swiss Army will come here in July, when there is the celebration for this armistice,” he said.