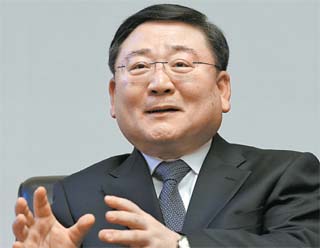 Vice Chairman Lee Hyung-keun says Kia Motors has come a long way since its days as the ugly duckling of Hyundai Motor Group.

The stylish K-Series has helped Korea’s second-largest automaker sell more than a million vehicles since 2009, but the 61-year-old Lee emphasizes that his biggest concern is to sustain growth for the future and enhance the brand image of Kia.

And the K9 flagship stands as a symbol of the challenges facing the brand.

The sedan, which was released last May, has sold only about 7,600 units so far, roughly half its original goal, shadowed by Hyundai Motor’s established Equus and imports.

“I never thought imported cars could achieve a 10 percent market share in Korea so fast,” Lee said in an interview with the JoongAng Ilbo on Friday. “Foreign auto brands poured cars into Korea at a time when consumers’ perception of imports was improving.”

Lee admitted he may have been too optimistic about K9 sales but said the quality of model is excellent.

He notes that Hyundai Motor Group Chairman Chung Mong-koo still uses a K9 even though the new Equus has been rolled out. After all, Lee said, consumers ride “brand” and his company’s focus will be how to improve the Kia image.

Q. The global auto market seems to be tough this year. What’s your perception?

A. Japan is the one we are mostly concerned about, as Japanese brands have revived. With the weak yen, we expect them to go aggressively after the U.S. market. Our first goal is to secure our current market share [3.8 percent] in the United States.

Because of the weakened yen, some worry that conglomerates will try to rip off subcontractors.

We look for shared growth, and if suppliers have capacity we allow them to supply to other global car companies. Because of this, our suppliers get bigger and their production costs get lower and they are better able to cope with currency factors. It’s a win-win and great insight from Chairman Chung Mong-koo.

Are there any plans to build additional plants overseas?

Even though we say it’s difficult, global demand for the industry keeps growing. After construction of our plant in China is finished, we will finalize expansion of our production capacity. It is also important to increase productivity with two daytime shifts, which will be conducted next month.

In the United States, Kia is still far from being considered a luxury car.

We are enhancing our brand image. Last year in an Interbrand survey, Kia was ranked 87th, our first time among the 100 most recognizable global brands. Our real retail price, considering discounts and promotions, will match that of competitors in the future.

What’s your plan to compete against imported cars?

Many drivers still think of domestic cars as they were in the past. We will work hard to tell customers about how domestic cars have changed. We are also reinforcing after-sales service. We have a total of 19 repair shops under our direct management that will be renovated. How can we earn the trust of customers in a house that is dirty and old?

How would you cope against a diesel-fueled model from a foreign brand?

We will release a diesel-version of a current model next year if everything goes well. For example, it could be a diesel-fueled K5. Hyundai’s i40, which is diesel, also has a good reputation overseas. There is a fantasy that imported cars are always better in performance. But if we communicate with our consumers with sincerity, I think we can change this perception.

The K9 seems to be struggling. Why?

We didn’t really think hard enough about how customers would see Kia models compared to Hyundai or foreign brands. Customers complained a lot about our old-style options list. We mirrored ourselves a lot and also released products earlier this year with adjusted prices and options.