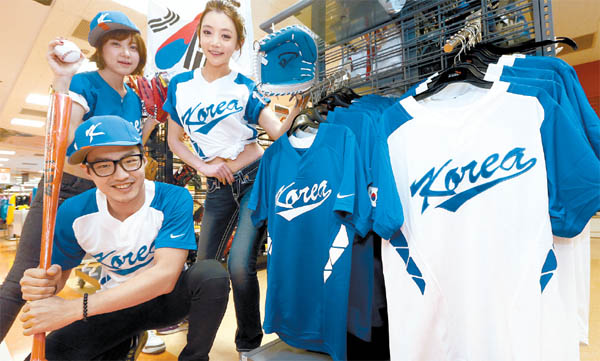 WBC baseball jerseys and hats were available at E-Mart, the country’s largest discount chain, four days ahead of the opening of the third World Baseball Classic. The discount chain is exclusively selling replica uniforms at its 24 stores through March 20. By Kang Jung-hyun

The first game of the Korean team at the premier international baseball tournament is three days away, but the World Baseball Classic (WBC) is already a hit with Korea’s retail industry.

Stores are rolling out WBC-related promotions and travel agencies are offering packages that include game tickets.

Nike, the official sponsor of the Korean WBC team, said 10 percent of the national team’s replica jersey supply was sold by preorder over four days.

“Sales will double when the first-round games start and the cheering for the Korean team heats up,” said a Nike spokesman.

E-Mart, the country’s largest discount chain, plans a series of WBC sales through March 20 and is the exclusive seller for Korean team replica jerseys and hats.

The jerseys come with a white background for home games and blue for road games. Prices are 79,000 won ($72.60) for uniforms and 35,000 won for hats. E-Mart is also selling gloves modeled after those of national team players Yoon Seok-min, Jang Won-sam and Lee Yong-kyu at 59,000 won to 99,000 won. The discount chain enjoyed increased demand for baseball merchandise during the second WBC in 2009, when sales surged 310 percent compared to the same period in the previous year.

“The national team uniform is more popular than general uniforms among baseball fans,” said Lim Jae-hong, a sporting goods buyer at E-Mart. “We will hit a sales home run this time again.”

Lotte Mart also is promoting baseball merchandise at its 38 stores, including Jamsil, southern Seoul, from tomorrow through March 6.

It is introducing baseball gloves for children by Franklin, Zett, Rawlings, Sasaki and Wilson starting at 19,000 won, or up to 60 percent less than the regular price.

Baseball supplies are also popular at online shopping malls, increasing 40 percent compared to last month at G Market and Auction. G Market is holding a “cheering promotion” starting tomorrow to give away tickets for the semifinal and championship games in the United States to three customers who post cheering comments on its message board.

The shopping site 11st is also holding a baseball promotion called “All Citizens, All Home Run King” to give out 3,000 won discount coupons to 1,000 customers with purchases of 30,000 won or over.

Also getting in the game is the travel industry. Hana Tour introduced a travel package to the second round game at the Tokyo Dome, expected to feature Japan against Cuba. The price is 399,000 won to 499,000 won.

Lotte JTB is selling a travel package to a WBC game in Taiwan for 300,000 won.