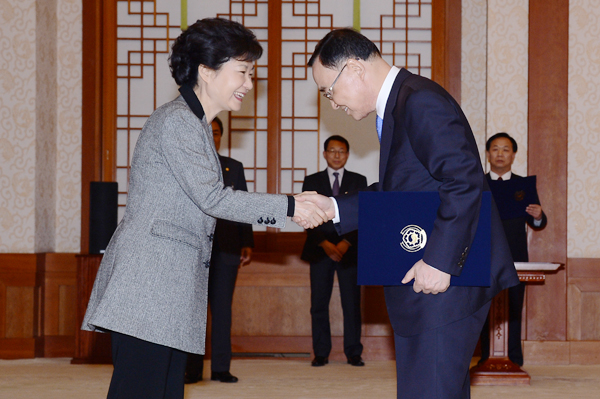 The legislature held a plenary session yesterday and approved Chung’s appointment. Of the 272 lawmakers who attended the voting, 197 supported the appointment, while 67 opposed it. Eight votes were counted invalid.

Park yesterday held a brief ceremony at the Blue House and awarded the appointment certificate to Prime Minister Chung.

“Concerns are high over the delay at the National Assembly to pass the government restructuring bills,” Park was quoted as telling Chung by her spokesman Yoon Chang-joong. “I hope the prime minister stands firmly at the center for smooth operation of the ministries.” 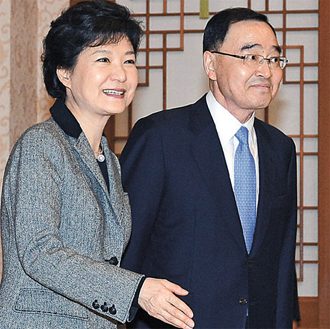 Earlier in the day, ruling and opposition members on the special committee that grilled Chung during his confirmation hearings presented a report on their findings.

The confirmation hearings of the veteran former prosecutor took place from Wednesday until Friday to vet his qualifications. The report presented both positive and negative evaluations of Chung.

It said Chung has basic abilities and a strong will to perform his role as prime minister but lacks understanding on pending issues concerning state affairs. It also said he failed to provide proper explanations about some scandals, including alleged real estate speculation.

Park formally requested the National Assembly on Monday to approve Chung as her prime minister.

Although Park finally managed to appoint a prime minister, the first cabinet meeting of the Park administration, scheduled for yesterday morning, was canceled because she has not been able to form her cabinet.

The deadlock in the National Assembly in approving a package of bills to restructure the government has prevented Park from appointing ministers before her inauguration on Monday.

A series of confirmation hearings on the minister nominees is scheduled to begin today and continue until March 6.

Three nominees - Yoo Jeong-bok for the security and public administration minister, Yoo Jin-ryong for the culture, sports and tourism minister and Yoon Seong-kyu for the environment minister - will face hearings today.

Confirmation hearings for the nominees whose ministries are to be reshaped or newly established under the government restructuring plan were yet to be scheduled.

Those nominees include Hyun Oh-seok, the deputy economic prime minister nominee, and Kim Jeong-hun, nominee to head the new ministry on future planning and science.

Due to the delayed passage of the government restructuring bills, it will take some time for Park to have her first meeting with the cabinet she opted to work with.

The stalled negotiation between the ruling Saenuri Party and the main opposition Democratic United Party has been seen as the first test for Park’s leadership.

While the negotiation was stalled over the scope of the role of the new ministry on future planning and science, it is unlikely that Park will make a concession since it is the core of Park’s signature program to build a creative economy.

“The president has made an appeal that she wants to work,” Hwang Woo-yea, chairman of the Saenuri Party said.

“The Ministry of Future Planning and Science, however, cannot work when broadcasting and communication policies are separated. We are asking for the opposition party to allow the very basics for this ministry to work.”

The DUP attacked Park directly for being stubborn.

“We made concessions after concessions for the Park administration to walk the path of new changes,” said Representative Park Ki-choon, DUP floor leader. “The issue is securing the fairness and neutrality of broadcasters. But if the new ministry will have the authority over broadcasting permits, how will fairness be ensured?”

As of now, the Korea Communications Commission is in charge of policies governing both the communication and broadcasting industries.

While the Saenuri Party supports Park’s plan to hand over the broadcasting policy oversight to the new future planning ministry, the DUP has resisted the idea, claiming it will undermine the fairness and integrity of broadcasters.

Taking into account Park’s past as a lawmaker, she could endure a long-drawn-out war at the National Assembly to push forward her plan. In 2010, she managed to accomplish government relocation to Sejong City despite fierce attacks by the then majority Lee Myung-bak faction inside the ruling party. The stalled passage of the government restructuring bills also caused a delay in Park’s appointments of Blue House senior officials under the changed organizational structure.

Park has announced that she wants to create a new office devoted to national security in the Blue House and named Kim Jang-soo, former defense minister, as its chief.

She also said she will elevate the presidential security service chief to a ministerial-level post and named Park Heung-ryul to the position. Nine senior secretaries were also to be appointed in her Blue House.

Because the changes are still pending for approval at the legislature, Park was not able to formally appoint Kim as the chief of the national security office. Kim Haing, presidential spokeswoman, said yesterday that Kim Jang-soo is still a nominee but began his work because the Blue House operation cannot remain idle. After her inauguration, Park appointed Monday her chief of staff, Huh Tae-yeol, and the head of security service Park Heung-ryul under the titles used during the Lee Myung-bak Blue House to start the operation of her presidential office.

The Park Blue House will have 36 secretaries, but no official announcement was made on who will serve the posts. Park, however, quietly filled some of the posts, and their names will be published in the Korea Official Gazette after the legislature approves the restructuring.

Former Saenuri lawmaker Kim Seon-dong was appointed as political affairs secretary, while Deputy Minister Joo Hyung-hwan of the Ministry of Strategy and Finance was named as the secretary for economy and finance.

Choi Sang-hwa, who worked on the preparation committee for Park’s inauguration ceremony, was named as the head of Chunchugwan, the press center of the Blue House.

Kim’s team will manage the human resources files of public servant candidates and support the civil affairs senior secretary’s vetting of the nominees.