Delegations from around the world visit Blue House

Delegations from around the world visit Blue House 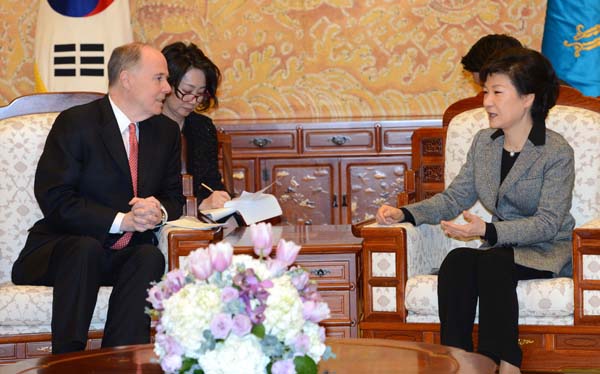 President Park Geun-hye received yesterday delegations from 18 countries from around the world including senior officials from Washington, concluding her inaugural diplomacy with the four superpowers amidst growing concerns over North Korea’s nuclear arms program.

Following her meetings with delegations from China, Japan and Russia on her inauguration day, Park received White House National Security Adviser Tom Donilon at the Blue House on her second day as president and discussed major pending issues between the two countries.

According to the Blue House, Park and Donilon agreed to continue developing the U.S.-South Korea alliance based on their 60-year-long trust. Donilon also stressed that the U.S. commitment to the mutual defense treaty with South Korea remains firm and the two countries should work together to upgrade the alliance.

The U.S. envoy also said Washington hopes for Park’s visit to the United States as soon as possible, and Park replied that she wants to meet with U.S. President Barack Obama in the nearest future to talk about bilateral cooperation. Donilon, who oversees the Obama administration’s foreign and security policy, also stressed the importance of close cooperation and coordination between Seoul and Washington in coping with Pyongyang’s provocations and nuclear aspirations, the Blue House said. Park and Donilon agreed to reinforce their cooperation to resolve the nuclear crisis.

During the visit, he stressed that the six-party talks should resume as soon as possible, pointing out the need for diplomacy to end the nuclear crisis while avoiding dangerous escalation. He explained the outcomes of his talks with Chinese officials to Park yesterday. During their meeting, Eliasson expressed his support for Park’s North Korea policy on trust-building, while Park said international efforts are critical to end the North’s nuclear threats. She said the pattern of rewarding the North’s bad behaviors must end to persuade Pyongyang to make the right choice.

Park also met with more Japanese delegates yesterday afternoon. She met with former Prime Ministers Yasuo Fukuda and Yoshiro Mori and Fukushiro Nukaga, secretary general for the Alliance of Korean-Japanese Lawmakers. Park already received Taro Aso, Japan’s deputy prime minister, yesterday. During her meeting with Aso Monday, Park expressed concerns over Japan’s sharp shift to the right. She said it was regretful that pending issues including the history dispute are still impeding the two countries’ relations and urged Japan to confront its history, work to cure the wounds from the past and understand the pain of the victims to build a true friendship with Korea.

In addition to her meetings with U.S. and Japanese delegations, Park also had meetings with leaders of Canada and Australia. She also met with dignitaries from other countries including Demark, France, England, Germany, Indonesia, Vietnam, Peru, Kuwait and Saudi Arabia.