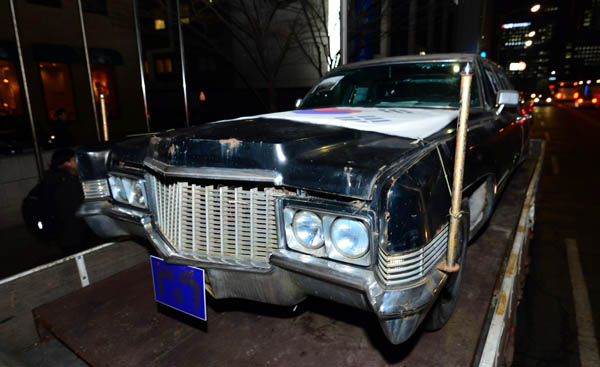 A 1970 Cadillac Sedan de Ville, once used for the 1972 presidential inauguration for military autocrat Park Chung Hee, is parked near the U.S. Embassy yesterday in central Seoul after it was moved from Gwanghwamun Square. Park Gwang-jong, the Cadillac’s owner who transported the rusty, bulletproof vehicle from Nonsan, South Chungcheong, said he purchased the presidential car for 917 dollar at a Nonsan junk shop. [NEWSIS]

On the day of the presidential inauguration, a 54-year-old man named Park Gwang-jong drove a truck from Nonsan, South Chungcheong, with a black 1970 Cadillac on the back.

Park unloaded the sedan near Gwanghwamun Square so people could see the old and rusty vehicle.

According to the man, military autocrat Park Chun Hee used the rusted, bulletproof car during the 1972 presidential inauguration.

“The car has been parked in my backyard. I brought it here to honor the presidential inauguration,” said Park, who runs an auto repair shop in Nonsan.

What surprised many people at the site, besides the fact it was a presidential vehicle, was the deteriorated condition of the vehicle.

Many parts of the 43-year-old vehicle were dented. The blue presidential license plate with two symbolic phoenixes is part of the evidence he used to prove the vehicle was once the president’s.

The official report published by the Cultural Heritage Administration in 2007 confirms Park’s claim on the vehicle.

Titled “Automobiles with Modern Cultural Heritage,” the report states the vehicle deserves historical value as it was the country’s very first bulletproof vehicle used for the 8th presidential inauguration.

The report also confirms Park’s ownership of the vehicle, citing his purchase of the car for 1 million won ($917) at a Nonsan junkshop. The report continues to say Park bought the car right before it was about to be exported to Vietnam after it was declared junk.

How the vehicle that carried a president during his inauguration ended up at a junkshop, let alone was sold for 1 million won, is anyone’s guess.

“It seems that the vehicle was used as an exhibit until 2006 at the Army Ordnance School in Gyeryong, South Chungcheong,” said an official at the army headquarters, who spoke on condition of anonymity.

“Then it seems the car was declared a scrap metal car and went through due process to be sent to a junkyard.”

Lee So-yeon, an official at modern cultural division at the heritage administration, told the JoongAng Ilbo Park’s 1970 Cadillac is not registered as a cultural asset.

“Park’s Cadillac will be eligible for the cultural asset designation once either the car is repaired or documents detailing the car’s history are produced.”

Two other presidential vehicles, both Cadillacs, used by military strongman Park during his 18-year reign, are owned by a private collector named Baek Jung-kil. Baek’s two Cadillacs are not registered cultural assets either.

For cultural properties that are not registered as cultural assets, there is no regulation mandating an individual owner, like Park, to conduct repair work no matter how much damage has been done.

Park Chung Hee’s Cadillac was transported back to Nonsan Monday night and once again sits in the backyard of Park’s house.