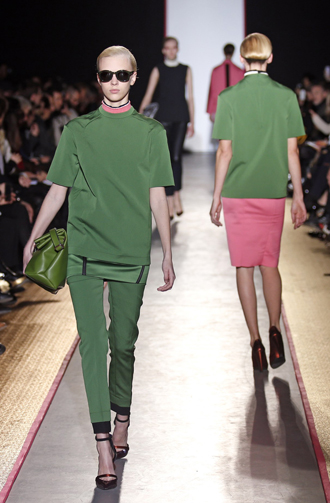 The world’s largest traveling circus of fashion editors, models, buyers and journalists has descended on the French capital, clutching their metro maps and city guides, to cap fashion season for nine days of intensive ready-to-wear.

And this fall-winter 2013-14 is the biggest to date, with some 99 “on-calendar” shows that see the week almost tearing at the seams, starting earlier and finishing later than ever.

“There are 12 shows a day. Twenty-two different nationalities this season. With new top designers at work,’’ says Didier Grumbach, president of the French Fashion Federation. “It’s an impressive mix, an energy that sets Paris apart from what’s going on elsewhere.’’

The similarities start and end with their nationalities; all three threw together strong but highly individual collections.

If Branquinho was elegance, Charlier was edgy architecture and Vaccarello was retro sex-appeal.

The no-holds-barred sex appeal for Anthony Vaccarello is not for the faint-hearted. The third Belgian designer to show on Paris fashion week’s first day served up a black-and-white ode to the early ’80s in a show that featured micro-skirts, chainmail, a lot of skin and lashings of sensual leather.

It was the modern bohemian woman on parade. Veronique Branquinho mixed and matched eclectic references, from wooden African bracelets to Obi-style dresses with belts.

Stetson cowboy hats in Shetland went too far, but overall it was a strong collection for the up-and-coming designer.

Architecture, “art brut’’ and Dutch Master Brueghel were all inspirations behind Cedric Charlier’s diverse show. The first pieces, among the collection’s best, mixed up sharp geometric paneling alongside oversize coats with fluid, rounded shoulders. Ensembles were made up of several layers, like square navy skirts on top of knee-length leggings. AP