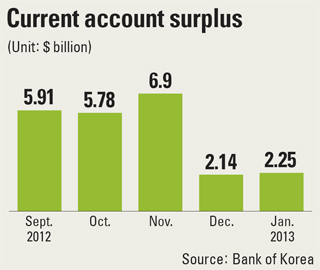 Korea’s current account surplus widened in January from the previous month as exports of tech and petrochemical products remained strong, despite the won’s ascent against the Japanese yen, the central bank said yesterday.

The January gain is the largest surplus since November and the 12th straight month of a surplus. The BOK said the January surplus came with an increased number of working days last month. The Lunar New Year holiday fell in January last year.

“The surplus is likely to be smaller for February, but the country is expected to see an underlying trend toward a surplus,” said Cho Yong-seung, director of the BOK’s monetary and financial statistics division.

The data came amid concerns that the won’s ascent will hurt exports, which account for about 50 percent of the Korean economy.

Japan’s aggressive monetary easing has unnerved Korean policy makers as the move is putting downward pressure on the yen, which in turn, makes prices of Korean products more expensive in overseas markets. The Korean currency gained about 5 percent month-on-month against the yen, while falling 1 percent to the dollar in the cited period. Korea’s goods balance logged a surplus of $2.6 billion in January, compared with a revised $1.92 billion in the previous month.

In January, exports rose 13.9 percent on-year to $47.14 billion and imports inched up 3.6 percent to $44.55 billion. The service account, which includes outlays by Koreans on overseas trips, posted a deficit of $927.1 million last month, a turnaround from a surplus of $30.7 million in the previous month.

The primary income account, which tracks wages for foreign workers and dividend payments overseas, logged a surplus of $968.4 million in January, up from a $639 million surplus the previous month.