Higher values may push up taxes

Higher values may push up taxes 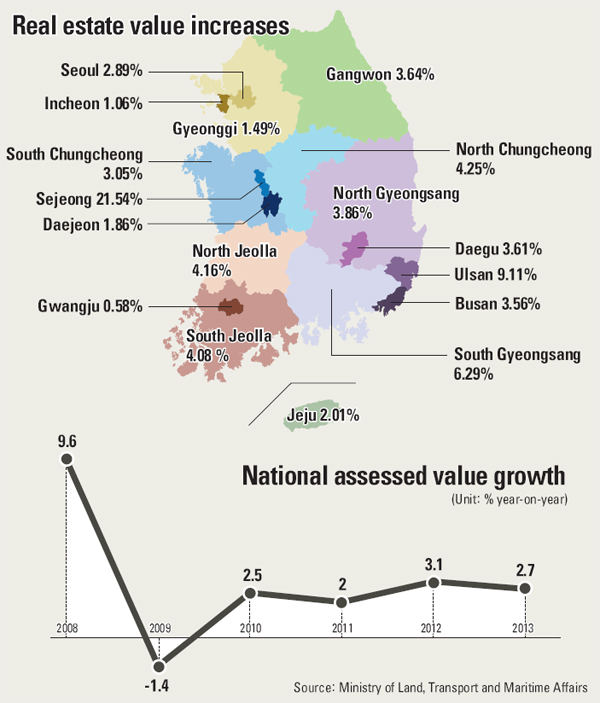 At a time of mounting household debt and reduced spending amid an overall economic malaise, some property owners are likely to face higher real estate tax bills this year.

According to the Ministry of Land, Transport and Maritime Affairs, the nationwide assessed value of real estate increased 2.7 percent this year compared to 3.1 percent in 2011. The assessed value has been rising since 2010.

Sejong City, where numerous government offices including that of the prime minister and the Ministry of Strategy and Finance are relocating, saw the biggest increase in assessed property value at 21.5 percent. Ulleung, North Gyeongsang, was second at 16.6 percent followed by Geoje, South Gyeongsang, at 14.2 percent. The ministry attributed the increases in these areas to tourism industry developments.

The Seoul metropolitan area expanded 2.18 percent year-on-year thanks to government-built low-income apartments, known as “bogeumjari,” and infrastructure projects, including the second Yeongdong highway and the Seongnam and Yeosu subway line.

“Although the overall real estate market continues to struggle, major development sites including Sejong, where the municipal government office is relocating, and Geoje, South Gyeongsang, where a marine tourism complex is being developed, contributed to the nationwide rise in assessed value,” said a Land Ministry official.

In contrast, Gwancheon in Gyeonggi, which lost many government offices, saw its total assessed value lose 0.38 percent, the biggest decrease in the country. Jung District in Incheon fell 0.35 percent, while Deokyang District of Goyang, Gyeonggi, was down 0.25 percent.

As it has been for the past nine years, the most expensive piece of real estate in the country was the Nature Republic building in Myeong-dong, central Seoul. According to the Land Ministry, the assessed value of the land is 70 million won ($64,427) per square meter, 5 million won more than in 2012.

With Korea’s total household debt at a record of nearly 960 trillion won, any increase in real estate taxes would weigh heavily on homeowners.

As the nationwide average assessed value on property grew, more people were subject to the tax. In 2011, 250,000 people were affected by the tax and last year there were 270,000.

The comprehensive real estate tax was launched during the Roh Moo-hyun administration to cool down a real estate market that was driving the up the price of homes and land, particularly in the posh neighborhoods of Gangnam, southern Seoul.

More than 60 percent of the people who paid the comprehensive real estate tax in 2011 lived in Seoul, 21.2 percent in Gyeonggi and 3.8 percent in Incheon.