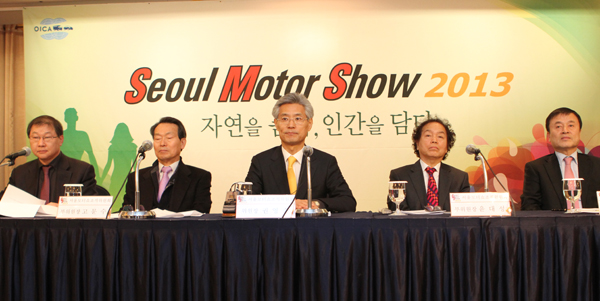 Kwan Young-soo, the head of 2013 Seoul Motor Show Organizing Committee, center, speaks during a press conference at the Lotte Hotel in Seoul yesterday surrounded by other executives from the committee. The ninth edition of the biannual auto show will be the largest in its history, with 331 companies from 13 countries participating. The event will run from March 29 to April 7 at the Korea International Exhibition Center (Kintex) in Goyang, Gyeonggi. According to the committee, a total of nine new vehicle models will make their world debut and 18 will be unveiled for the first time to Korean auto lovers. The organizers said that it expects a total of 1.2 million visitors during the 10-day event. It also hopes the show will draw at least 15,000 buyers from overseas to make deals with local companies. The committee expects some $1.5 billion worth of business deals to be negotiated at the motor show, and estimated that the impact on the economy could reach 1 trillion won. Provided by the organizing committee