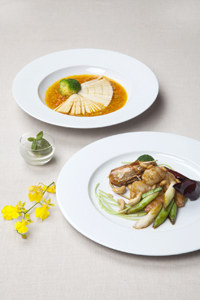 All the prices include tax and service charges.

It has invited Koji Koizumi, chef and owner of Michelin two-star restaurant Kohaku, to the location . The meal is priced at 544,500 won per person (or 363,000 won without champagne).

Chef Koizumi is a young, rising star in Japan who earned two Michelin stars at the age of 31.

His restaurant received two Michelin stars for two consecutive years. He is known for his modern take on traditional kaiseki cuisine, incorporating ingredients not usually associated with Japanese food such as truffles, shark’s fin and caviar while staying true to traditional flavors and concepts.

He will also use truffles, beef and marinated fish.

To March 29: Myongwolgwan, the Korean barbecue restaurant at the Sheraton Grande Walkerhill, is holding a galbi promotion. Large portions of the seasoned Korean ribs will be offered at 37,000 won per person, including tax and service charges. The deal is available from 12 p.m. to 5 p.m. on weekdays, except public holidays.

In 2010, Zagat Survey named Myongwolgwan the best choice for Korean food in Seoul.

Throughout March: The buffet restaurant at the Grand Hilton Seoul is busy preparing for the new season with seasonal spring greens. More than 100 dishes will be available at the buffet as well as specialties like Japanese sushi and Korean tartare.

Diners will also be able to enjoy fresh dishes like bibimbap and traditional Korean pancakes with spring flowers. 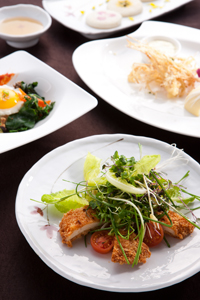 Dishes such as chicken cutlet and wild chive salad, tofu and shepherd’s purse salad, spring namul bibimbap, seafood pancake with wild garlic, and flower pancake are just a few on the menu.

The chef has also prepared new Korean dishes including steamed blue crab, stir-fried baby octopus with beef bulgogi, and others made to revive the exhausted body and soul of customers.

Throughout March: The Ritz Deli is holding a strawberry event.

Cakes and desserts on offer will include a lemon and strawberry tart with vanilla cream and strawberries on a crispy lemon tart base. Diners can also enjoy a strawberry chocolate tower on which juicy strawberries top a crunchy mixture of nut brownie, crispy crunch and white chocolate.

Ongoing: The JW Marriott Hotel Seoul presents a promotion called “Dad, Where Are We Going?” in which children can spend time with their fathers while mothers are able to take a break by soaking in the spa.

Two options are available for mothers: an hour-long aroma scrub treatment or a facial treatment. In the meantime, fathers and children can visit every nook and cranny of the hotel by carrying a JW Marriott Hotel Passport.

Each space in the luxury hotel has its own unique task, and when each is completed, children earn ice cream for their work that can be picked up at the deli at the end of the day.

The promotion also includes a breakfast for two adults and one child at The Cafe.

The package costs 459,000 won excluding tax and service charges and is available on weekends and public holidays.

*Event information is provided by the hotels.