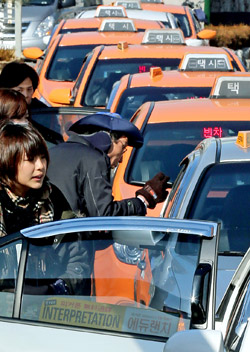 Taking cabs in Korea could become more expensive as the Ministry of Land, Transport and Maritime Affairs plans to file a draft bill with the National Assembly later next month that would increase the basic fare of taxis and extend the hours for increased fees.

The ministry said yesterday it will have a public hearing for its taxi industry development plan that contains raising basic fares as part of the plan.

The ministry already had a preliminary announcement on the legislation of the so-called “taxi support law” last month.

It has been holding public hearings to hear ideas from various people.

After reflecting upon public opinion and possibly revision, it will file the draft bill to the National Assembly later next month and finalize its plan.

According to the ministry, it is considering extending the nighttime extra charge rate to earlier in the night.

Currently, the increased rate at night applies from 12 a.m. to 4 a.m., but under its new plan, the beginning time could be as early as 10 p.m.

The ministry is also considering adopting a weekend rate, although the exact rate and when it will apply are still under review.

“We came up with this number by applying the average taxi fare of OECD countries,” an official from the ministry said.

“Considering the inflation rate, the fare could be higher.”

In order to support the taxi industry, the ministry also plans to reduce the number of taxis as many pointed out that the oversupply of taxis hurts the entire industry.

Currently, there are about 250,000 taxis nationwide, but the government is trying to reduce that by 50,000 taxis over the next 10 years.

To reduce the number of taxis, the ministry is trying to tighten the conditions to transfer individual taxi licenses.

The ministry has been opposing the idea of a taxi law which designates taxis as public transportation.

Instead, the ministry has been insisting that its alternative plan offers a better solution for the taxi industry.