President Park Geun-hye yesterday pressured the National Assembly to approve her government restructuring plan, expressing concerns about the delayed creation of her government despite the North Korean nuclear crisis and economic slowdown.

Even though Park’s chief of staff, presidential security service chief and senior secretaries attended the meeting, conspicuous in his absence was Kim Jang-soo, named to head the new national security office in the Blue House, because his appointment is yet to be formalized.

“North Korea has conducted a nuclear test, and the nation’s security is being threatened, but the person who should work as the national security control tower could not attend the meeting because the government restructuring bills have not been approved. I am very concerned about this situation.”

It was the first time that Park directly voiced her concerns about the legislative deadlock over the government restructuring plan.

After her presidential victory, Park made public a grand plan to restructure the Blue House and the government ministries.

She established the new powerful office inside the Blue House to oversee all national security matters and named Kim, former defense minister, as its head.

Park also announced restructuring plans for the cabinet, including the creation of the new Ministry of Future Planning and Science to develop a new growth engine for the economy.

Park wants to give the new ministry policy oversight over the broadcasting industry, and the ruling party supports it, but the main opposition Democratic United Party said that will undermine the integrity and fairness of the broadcasters.

Due to the disagreement, the package of bills linked to the restructuring of the Blue House and the cabinet is stalled in the legislature.

“I have put convergence as the key task to revive our economy,” Park said. “Because the Ministry of Future Planning and Science is not approved yet, I earnestly hope the National Assembly will pass the plan as soon as possible.”

She also asked her secretaries to pay special attention to the recent price hike. “Recently, the prices of processed foods and utilities are going up at once due to a number of reasons, such as the increase of raw material prices in the international market,” Park said.

“I am worried that the price hike of the items that are closely linked to the working class people will worsen their burdens.”

She asked her presidential aides to pay special attention to minimize the price hike through stern enforcement of laws.

She also dismissed growing speculation about tax hikes in her administration.

“Many are talking about tax hikes, but I don’t want you to increase tax revenues to come up with financial resources to implement my pledges,” she said. “You should create plans focusing on efforts to cut wasteful spending and earn revenue by legalizing the underground [or black market] economy.” 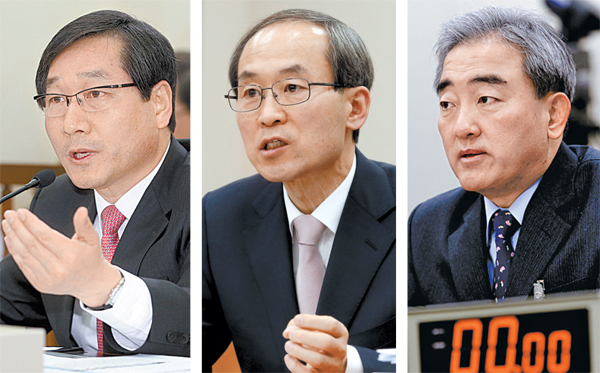 Three cabinet nominees - from left, Yoo Jeong-bok, Yoon Seong-kyu and Yoo Jin-ryong - are grilled by lawmakers yesterday at their confirmation hearings in the National Assembly. By Kim Hyung-soo

According to Yoon Chang-jung, the presidential spokesman, Park will preside over a Blue House secretariat meeting once a week.

The secretariat will have two more additional weekly meetings under the provision of the presidential chief of staff, Huh Tae-yeol.

Huh will also conduct a situation briefing at 8 a.m. every day to oversee some pending issues, Yoon said.

Asked about the administrative vacuum in the Blue House, Yoon said Park did not particularly comment on it.

“Because it is a transition period, we think it is inevitable for us to be helped by staffers from the previous Blue House,” Yoon said. “We are doing our best to complete the secretariat.”

He also said the cabinet won’t likely start its routine meeting next week. During the Lee Myung-bak administration, the cabinet meeting routinely took place every Tuesday morning, and Lee and his prime minister took turn hosting it every other week.

Park took the oath of office on Monday, but she could not host her first cabinet meeting on Tuesday because she had no confirmed cabinet members. The National Assembly only confirmed Chung Hong-won as the prime minister Tuesday afternoon, and Park formally appointed him later in the evening.

According to Yoon, Park won’t likely host a cabinet meeting next week, and there is no possibility for Chung to host it either.

Park nominated 17 ministers for her government, but the confirmation process only began yesterday at the National Assembly as the ruling and opposition parties were deadlocked over the government restructuring plan.

Three nominees - Yoo Jeong-bok for the security and public administration minister, Yoo Jin-ryong for the culture, sports and tourism minister, and Yoon Seong-kyu for the environment minister - were grilled by lawmakers over how suited they were for the job.

More hearings will take place until March 6, but hearings for the nominees, whose ministries are to be reshaped or newly established under the government restructuring plan, were yet to be scheduled.

As the dilemma over the government restructuring bills deepened, Saenuri chairman, Hwang Woo-yea, hinted at a possible compromise.

“The ruling and opposition parties must think whether we are confronting the essential matter or not,” Hwang said during a senior leadership meeting of the party. “The two sides need to seriously think if there is a possibility of concession and compromise.”

Representative Lee Hahn-koo, floor leader of the Saenuri Party, however, made it clear that the party will push forward Park’s planned changes by criticizing the opposition Democratic United Party for trying to obstruct the operation of the Park administration to tackle security and economic crises.

“The DUP is acting very politically at a very dangerous time,” Lee said.

The DUP remained firm and urged Park to allow the ruling party to make a concession.

“Although we repeatedly made concessions, the government restructuring bills could not advance because President Park ordered the ruling party to protect her original plans,” Moon Hee-sang, interim head of the DUP, said at a party meeting yesterday. “If the president and the ruling party remain pigheaded, the opposition party has no way to help them even if we want to. I urge President Park to make a bold decision.”