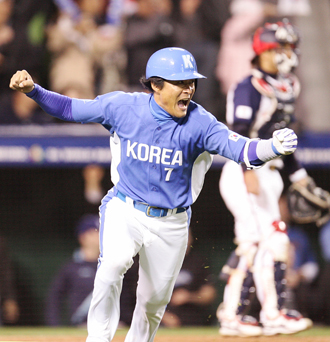 Lee Jong-beom reacts after hitting a two-run double at the top of the eighth inning in the Round 2 game of the 2005 World Baseball Classic between Korea and Japan. [JoongAng Ilbo]

Baseball has long played second fiddle to football on the world stage, remaining confined only to the United States and East Asia.

The World Baseball Classic, launched in 2006, is the Major League’s main effort to broaden its fan base from existing strongholds.

Unlike previous intercontinental competitions that failed to attract significant interest or talent, the WBC enjoys the cooperation of professional leagues from across the globe.

The inaugural event produced some unexpected results, such as Korea defeating the United States.

The second event was held three years later, but the schedule was later adjusted to every four years in order to avoid conflicts with the World Cup and Olympics.

Initially, the event struggled with skill gaps between national teams, with powerhouses like the United States likely to dominate.

So, the Major League adopted a rule that allows players to compete for their ancestral homes. That enabled former Los Angeles Dodgers catcher Mike Piazza to represent his grand-grandfather’s Italy in the inaugurating event in 2006. Alex Rodriguez of New York Yankees played for the Dominican Republic, his parents’ home country, in the 2009 event.

Helped by the rule, Major Leaguers now make up a majority of competitors in the event.

The WBC is distinctive from the World Cup and the Olympics as multiple countries host the event simultaneously so that more people can watch the games.

The first year’s events in 2005 took place in the United States, Puerto Rico and Japan. In 2009, Canada and Mexico also took part, and Taiwan joined for the third event.

By most measures, the WBC is still no match for the World Cup. In terms of size, profit and viewers, it is clearly outmatched. In 2009, there were 20,548 spectators per WBC game, less than half the average number for the 2010 South Africa World Cup.

Television viewers stand at less than 300 million, compared to 30 billion for the World Cup.

But the pace of expansion tells a different story altogether.

The number of WBC sponsors rose from 26 for the first event to 56 in the second, and according to WBC organizers, the second set of competitions brought in $32 million in profit compared to $12.8 million from the first event.

Based on these figures, WBC organizers are confident about the future of their event. Recently, they raised the number of participating countries from 16 to 28.

The top 12 countries at the second event have been joined by four countries who won four four-team group competitions last year.

Others are confident in the event as well.

“By the time the fifth event is held, say in 2021, the WBC will be a global festivity in a genuine sense,” said JTBC baseball commentator Song Jae-woo.