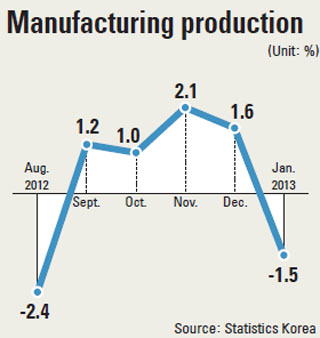 There have been some weak signs of economic recovery early this year, but any great expectations have been dashed as Statistics Korea reported yesterday that most major indicators of industrial activity fell in January.

Total industrial output slid 0.7 percent from December, although it was up 3.5 percent from a year earlier. The index is considered crucial to estimating the gross domestic product GDP, which grew 2 percent last year. The government forecast the economy will expand 3 percent this year. But private experts remain skeptical, saying the economy might well repeat last year’s lackluster performance due to harsh external market conditions.

The fall in industrial output was led by declines in the mining, manufacturing and service sectors.

Manufacturing, which accounted for 94 percent of the sector, slid 1.1 percent from the previous month. Operations at manufacturing plants stood at 78.1 percent of capacity, down 0.3 percentage point from December. Inventories grew 0.7 percent month-on-month as shipments were down by 1.1 percent, according to the data.

Bank of Korea this week said the business sentiment index among manufacturers stood at 70 in January and 71 in February, implying that businesses were pessimistic about the economy. The benchmark for optimism is 100.

The service sector also saw a 0.9 percent month-on-month drop in output due to contraction in the real estate, education, wholesale/retail, food and accommodation industries.

Retail sales, a key indicator of private consumption, fell 2 percent in January from a month earlier, mostly because of a 7.1 percent decrease in sales of durable goods, including vehicles, computers and home appliances.

“People put off spending in January because the Lunar New Year holiday fell in February,” said Lee Hyoung-il, a director at the Economic Policy Bureau. “There is an alternating pattern in economic indicators for January and February, depending on when the national holiday arrives according to the lunar calendar.”

Facility investment, a measure of expenditures by businesses, shrank 6.5 percent month-on-month and 13.6 percent year-on-year. Sluggish investment in transportation equipment and machines drove the overall decline in corporate spending on facilities, according to the government report.

“Facility investments remained too low throughout last year, and the index is still bad,” Lee said.

“We can’t deny that there are some positive signs of recovery both at home and abroad, but it is also true that uncertainties are lingering globally,” the report said.

The composite leading indicator for the Korean economy also fell 0.2 percent in January, suggesting that the economic outlook for the next six months is likely to remain bleak.