Leeteuk talked about the enormous popularity of Sistar in the military

Leeteuk talked about the enormous popularity of Sistar in the military 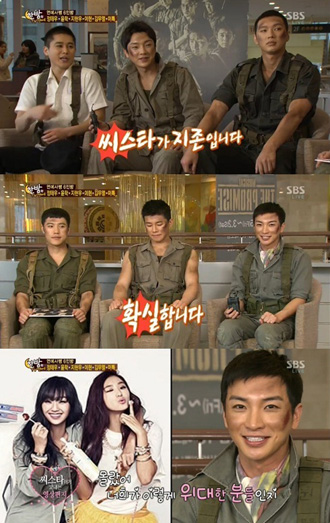 Leeteuk of Super Junior, who is currently serving military service, talked about the enormous popularity of girl group Sistar in the military, saying the group leagues ahead of the rest.
In an interview with SBS’s Night of TV Entertainment aired on Feb 27, He named Sistar when asked to pick his ideal type of girl. “I didn’t know you were such a big star here. I respect you guys,” he said in a video letter to the girl group.
He is now performing in the military musical “The Promise” with fellow military actor Ji Hyun-woo and Kim Moo-yeol. Ji said he gained weight and Kim mentioned his actress girlfriend Yoon Seung-ah, saying she attended the first performance in the same interview.
By Ahn Joo-hee