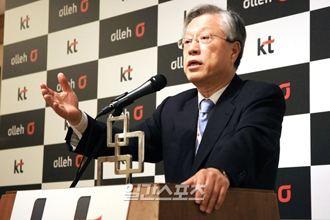 Lee Suk-chae, chairman of KT, said in a recent interview with the Wall Street Journal that the mobile carrier should be able to use broadband capability in various ways as Korea is on the front line of the broadband revolution.

In the Monday edition of the U.S. paper, Lee said he expects everything to be on on broadband networks in five years.

Although KT has been a traditional infrastructure company, Lee said it does not matter whether it is mobile or fixed-line when it comes to broadband.

“When it becomes a broadband network, you can think about the position that communication service will take. It will be a minor part of that capability,” said Lee.

Lee further explained that KT’s future will be doomed if the telecom company remains only in communication services, emphasizing the need for broadband.

According to Lee, “being broadband means you can invite a large number of OTTs, over-the-top service providers that do not own infrastructure but can perform services.”

The newspaper also quoted Lee as saying the company should use the broadband capability in such ways as providing users a certain marketplace and claim revenues from it. This includes creating virtual goods that can be traded and consumed over the broadband network, namely music services, learning services, e-learning and security tools.

The paper also implied that the survival of KT, which became a private company in 2002, depends on driving such services.