Rivals in the air and on the ground

Rivals in the air and on the ground 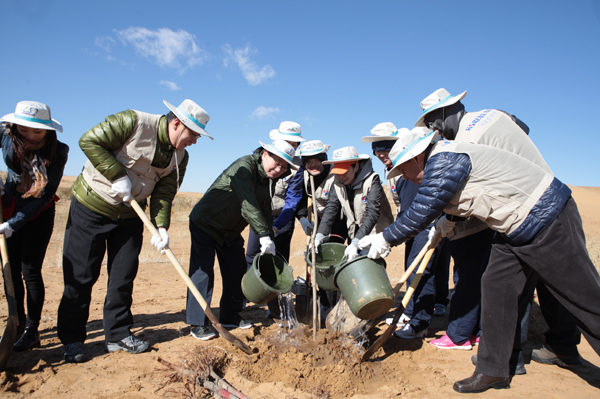 KAL volunteers plant a tree in a desert of Mongolia as a part of the Global Tree Planting Project. Provided by the company


Korea’s two flag carriers are not only competing over customer service in the air, but community service on the ground, and Korean Air Lines (KAL) and Asiana Airlines are rolling out their corporate social responsibility plans for the year.

Cho said “togetherness” is an extension of last year’s keyword “communication,” and for this year the company will boost its efforts to give back to the community. 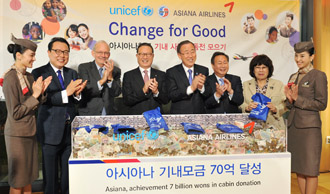 “The topic of day has become economic democratization of corporations,” Park said in his New Year’s message. “Our group should be a leader in society, not an object of criticism.”

Industry observers said the goals of the two airlines are in line with what President Park Geun-hye has expressed, emphasizing shared growth and urging corporations to take more responsibility for conditions in society at large.

“Airlines serve various kinds of customers and their brand image is very important to their business,” said Lim Chae-un, a business professor at Sogang University. “The airline industry basically embraces promoting the public interest, as it is a regulated industry with only a few companies operating in the market.”

“The amount of money that we put into these activities will not be much different than last year, but we are trying to focus on talent sharing that involves our employees,” an official from KAL said.

In Korea, the nation’s largest carrier is known for holding “Sky Love Bazaar” every year since 2006 to help those in need, an event organized by a group of employees known as “Sky Angel.” All proceeds from the bazaar go to a scholarship fund for students from low-income families and a fund for child protection.

Since 2001, in association with Korean Habitat, KAL employees have been participating in a event named “Building a Habitat of Love” helping to construct and donate houses for the homeless. There is also “Love Sharing Cafe,” which donates its proceeds to United Help for International Children. In addition, KAL’s Aviation Medical Center staff volunteers to provide free check-ups to needy families in rural and urban areas.

Asiana set up a special team in 2011 for CSR activities. Its domestic CSR activities include donations of books for multi-cultural families since 2007, while visiting rural villages to help with farm work.

But the airline has been most renowned for working with Unicef since 1994 on a campaign called “Change for Good.” The charity campaign raised more than 7 billion won ($6.45 million) via cabin donations last year.

Asiana has been going global for its CSR activities in recent years. Along with the Korea International Cooperation Agency (Koica), the nation’s No. 2 carrier has worked to set up solar-powered streetlights in Cambodia since 2010 and joined house-building projects in the Philippines and Vietnam last year. With these efforts, it received a Millennium Development Goals award at UN Global Compact Awards in 2011.

Not to be overshadowed by its competitor, KAL provided a Korean language service at the British Museum in 2009, Russia’s State Hermitage Museum in 2008 and the Louvre Museum in France in 2007.

The affiliate of Hanjin Group also emphasizes its “Global Tree Planting Project” in the deserts of Mongolia since 2004 to prevent desertification and reduce yellow dust. It was expanded to China in 2007 and Los Angeles in 2009.

The CSR competition recently heated up again as Asiana started a project named “Beautiful Classroom” in China since last year. The project aims to sponsor schools, by supplying them with computers, books and other resources, like musical instruments or sports gear.

Asiana previously announced that each of its 21 branch offices in China will be connected to a school in the region by no later than 2014. Last year, the company was able to sponsor seven schools in Dalian, Nanjing, Changchun and elsewhere.

KAL officials claimed they had the idea first in 2008 with a project that built a library and provided educational support activities.

“I won’t say Asiana stole the idea from us, but we are the first local carrier to help schools in China,” an official from KAL said. “Asiana has come up with good activities later and that’s one of their fortes.”