‘Happiness fund’ might be ready by end of March

‘Happiness fund’ might be ready by end of March 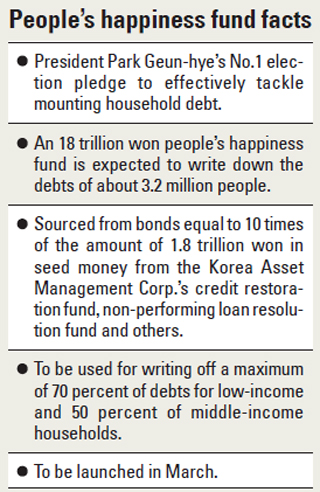 In a meeting with senior officials yesterday, Choo asked the FSC to “thoroughly prepare for specific measures to launch the people’s happiness fund within March.”

It was the first time a high-ranking government official specified a time frame for launching the fund that aims to assume some mortgage debt of homeowners suffering in the sluggish economy and frozen real estate market.

“The FSC will strengthen its monitoring of these situations to ensure that the people’s happiness fund will be launched without a glitch.”

Kim, who left 10 months before his official term ends to pave the way for the new government to choose its own FSC chief, had opposed Park’s idea of using public funds to bail out indebted households.

“Household debts can be resolved only when they are regarded as an issue between lenders and borrowers,” Kim said in December.

Park proposed creating an 18 trillion won people’s happiness fund during the election campaign as her No. 1 pledge to tackle mounting household debt.

The administration estimates the people’s happiness fund will be used to write down the debt of about 3.2 million people by a maximum of 70 percent of debts for low-income and 50 percent for middle-income households.

The government will also allow households to repay remaining household debt in installments over longer periods of time.

In addition, the FSC will check to be sure the 3 trillion won for Smile Microcredit and Sunshine Loan is used for low-income aid as planned.

“In the worst case scenario, loan delinquency ratios could go up as the scheme may give the impression to heavy debtors that the government will clear their debt again in the future and that they don’t have to work hard to pay them back,” said Lee Joon-hyup, a research fellow at the Hyundai Economic Research Institute.

An 18 trillion won people’s happiness fund is expected to write down the debts of about 3.2 million people.

Sourced from bonds equal to 10 times of the amount of 1.8 trillion won in seed money from the Korea Asset Management Corp.’s credit restoration fund, non-performing loan resolution fund and others.

To be used for writing off a maximum of 70 percent of debts for low-income and 50 percent of middle-income households.

To be launched in March.