Saenuri rep out on bribe conviction

Saenuri rep out on bribe conviction 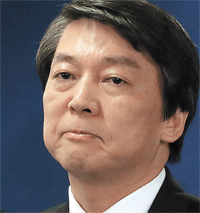 A ruling party lawmaker lost his legislative seat after being convicted of election bribery, creating one more vacancy ahead of the upcoming April by-election.

In July 2011, nine months ahead of the legislative election, Kim formed a private organization that served as a campaign office and sent text messages to eligible voters to promote his candidacy.

After that, in December 2011, he offered meals to nine local residents, who were also voters. He has also provided food and copies of his autography to residents on several occasions.

The first and second trials both ended with a sentence of 7 million ($6,466) in fines. Under the current law, if an incumbent lawmaker is convicted with a sentence heavier than 1 million won in fines, he or she immediately loses his or her seat.

Now Kim has become the third lawmaker to lose his seat obtained in the April 11 legislative election following Lee Jae-gyoon, another Saenuri lawmaker who lost his seat because of his campaign manager being convicted of election bribery, and Roh Hoe-chan, a lawmaker and a co-chairman of the Progressive Justice Party who received a four-month suspended prison sentence on charges of publicly revealing a conversation that was taped illegally.

The three vacant seats will be filled in the by-election scheduled in April - Lee’s in Yeongdo, Busan, Roh’s for Nowon C District, Seoul, and Kim’s in Buyeo, South Chungcheong.

Political observers are focusing on the Nowon C District, northeastern Seoul, which covers the area from Sanggye 1-dong to Sanggye 10-dong.

Since the government reorganized its constituencies in 1988, voters in the district have elected liberals only, except during the 18th National Assembly election.

Rumors spread in politics that the vacancy in the district could be filled by Ahn Cheol-soo, the iconic liberal who conceded his presidential candidacy to Moon Jae-in of the opposition Democratic United Party last year.

Immediately after casting his ballot in the Dec. 19 presidential election, Ahn departed for the United States and has not returned.

Besides the three vacancies, there are 15 other lawmakers who are at risk of losing their seats and have already been convicted in their first or second trials.

If the Supreme Court upholds the convictions until March 31, the seats to be replaced in the April by-election will amount to 18.