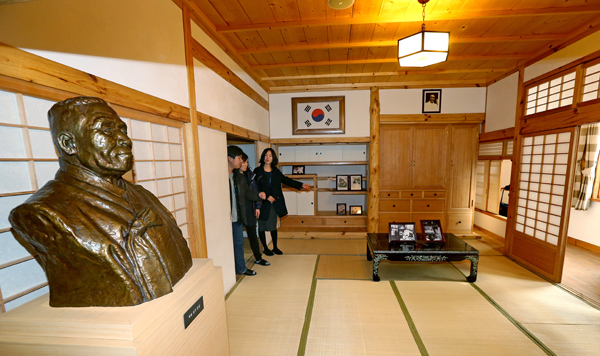 A bust of Kim Gu, a leader of the Korean independence movement against Japan, is displayed at the second floor of Gyeonggyojang. The Seoul Metropolitan Government will open the place to the public tomorrow after wrapping up its three-year-long restoration work.

Gyeonggyojang, the last venue used by the Provisional Government of Korea and where Kim Gu, a leader of the Korean independence movement lived from 1945 and was assassinated in 1949, will be opened to the public after wrapping up a three-year-long restoration work on a day after the March 1 Independence Movement Day.

The Seoul Metropolitan Government said yesterday that Gyeonggyojang, designated as the country’s No. 465 historic site, will be opened tomorrow to the public for free.

The municipal government unveiled the venue to the media prior to the official opening. Gyeonggyojang, in Jongno, central Seoul, is what the Provisional Government of Korea used as a government office after they came back to Korea from China in November 1945. The provisional government had carried out an independence movement against the Japanese from outside the country. Korea was liberated from Japan in August 1945. 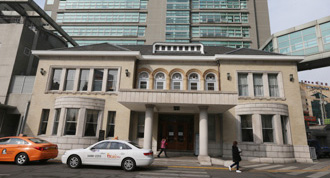 The building was used as a post for the U.S. Army stationed in Korea and also once used as a Taiwanese Embassy, but the building was purchased by Kangbuk Samsung Hospital in 1967 and has been used as a hospital facility since then. The restored Gyeonggyojang is a 945-square-meter (10,171-square-feet), two-story building with one underground level.

It will display the living fashions of the time period and traces of the great Korean independence movement leader Kim Gu, including his bloodstained clothing from when he was assassinated by Ahn Doo-hee, a second-lieutenant of the Korean Army on June 26, 1949.

At the time, Ahn testified that Kim caused social and political turmoil because he agreed to hold a negotiation between Seoul and Pyongyang.

The first floor of the building was used as a conference room for government meetings, including cabinet meetings, and also used as an office for public relations as well as a restaurant for VIP guests.

The office and bedroom of Kim Gu were located on the second floor. The basement, which was used as a boiler room and kitchen at the time, is now a small exhibition hall that will display the history of the Provisional Government of Korea.

“We have tried to restore the place where people can feel the spirit for the independence movement of the provisional government and our great leader Kim Gu,” said Han Moon-chul, spokesman of the city government.