‘Hiddink of the KMA’ retires after three years

‘Hiddink of the KMA’ retires after three years 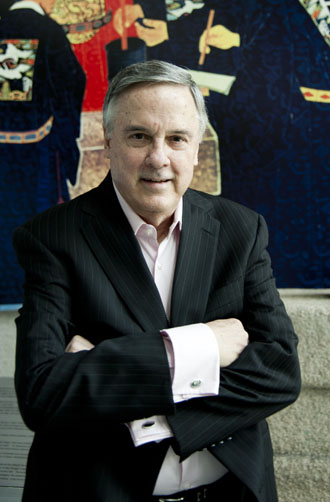 The 69-year-old vice administrator of the Korea Meteorological Administration, called the “Hiddink of the KMA,” after the legendary football coach Guus Hiddink, was appointed in August 2009 as the first-ever foreign public servant here, during a period when the KMA was heavily criticized for inaccuracy in its weather forecasts.

The accuracy rate of its forecasts increased from 88.3 percent in 2008 to 92.1 percent under Crawford’s leadership.

He also unified three federal agencies - the KMA, the Ministry of Land, Transportation and Maritime Affairs, and the Ministry of National Defense - to work together as a mutually beneficial team.

“Everyone said it would be impossible to get three federal agencies to cooperate with each other, but by treating each member agency as professionals and being considerate of their operational needs, the KMA helped accomplish the impossible in less than 12 months,” Crawford said in a press briefing on Monday, ahead of his retirement.

He also pushed to extend the life cycle of individual radar detectors of the weather radar network from nine to 20 years and Crawford, who reportedly earned double the annual income of the president, said, “As a result of work in these two areas, perhaps 160 billion won [$147 million] during the next two decades will be ‘costs avoided.’”

The former professor at the University of Oklahoma employed his experience modernizing the U.S. National Weather Service and the Croatian Weather Service, and working as a radar meteorologist at the National Severe Storms Laboratory.

During his time at the administration, the KMA has went from replying solely on imported foreign forecasting systems, which “created various limitations following deployment of the hardware,” to developing its own system.

“As a result, Korea has prepared itself to support developing countries with their system needs in these nations,” Crawford added.

The KMA also established a “Weather Radar Center,” which combines scientific expertise with radar meteorology, and is in the process of developing a dual polarization’ radar network which will help collect data to improve heavy rainfall advisories and warnings and more accurately predict short-term weather across the Korean Peninsula.

He added that for weather and climate information to become better used across Korea, the delivery of such information should be made more efficient and available to various sectors such as public safety, food security and agriculture, “for use in supporting the decision-making process in other agencies.”

But the most vital change within the KMA in his four years’ sojourn, Crawford said, was “the nurturing of many ‘change-agents’ inside the KMA, individuals who would not be satisfied with the status quo but would demand products and services that best served the Korean public.”

The meteorological expert said that Korea tends to be too hard on the forecasts at KMA. “By most any standard, forecasters at the KMA compare favorably with their counterparts across the globe in their levels of forecast skill.”

But Korean forecasts are not as willing to try out innovative approaches compared to their U.S. counterparts, he added.

“The work ethic of Korean forecasters is second to none,” said Crawford. “Furthermore, they work tirelessly each day to rank among the best forecasters worldwide,”

“When I visited the Blue House, I learned that I should ‘not screw up,’ because if I failed, the Korean government might not hire any more foreigners to work in the Korea,” admitted Crawford. And despite some naysayers in the beginning, he said, “Today, I feel as if the ‘mission’ has been accomplished.”