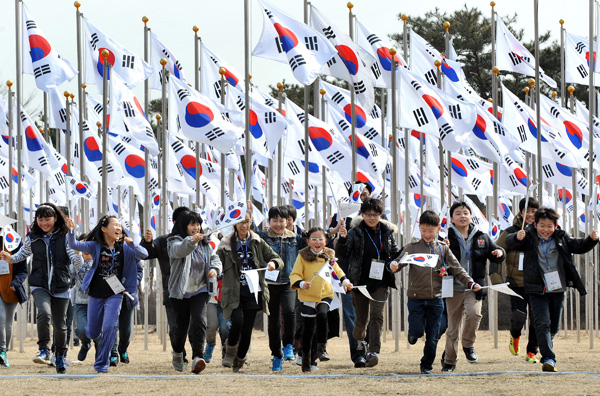 With Korean flags in the background, children run yesterday at the Independence Hall of Korea in Cheonan, South Chungcheong, after the opening ceremony of Dokdo School. The Independence Hall plans to provide information on the Dokdo islets. By Kim Seong-tae


While Japan ratchets up its anti-Korea stance by honoring Takeshima Day, Korea will celebrate March 1 Independence Day with cultural events and performances in a festive mood.

Thousands of citizens are expected to attend a torch-lit mass rally in Cheonan, South Chungcheong, where the Independence Hall of Korea is located.

Starting at 8 p.m., participants will depart from the plaza of the hall, emulating the 1919 nationwide protest against the brutal colonial rule of Imperial Japan.

Carrying torches in their hands, they will march toward a local market, called Aune, where Yu Gwan-sun, a renowned teenage girl and anti-Japan activist, was born.

There, they will re-enact the independence movement, resisting against actors dressed as Japanese military, in front of the monument of Yu.

In Daegu, the Central District Office will convene a special music performance in front of the house of Yi Sang-hwa, a nationalist poet during the colonial period (1910-45).

Three literature critics in white hanbok will dance to and sing the famous song “Dokdo Is Our Territory.”

Kim Jang-hoon, a singer known for his activities promoting Korea’s sovereignty over Dokdo, the disputed islets between Korea and Japan, landed on the easternmost islets by helicopter yesterday.

He uploaded photos of himself standing on the island in a black-colored coast guard uniform on his Twitter account, and urged people to download the image and set it as their mobile phone’s screen background.

So far, a string of celebrities have joined Kim’s campaign and uploaded photos of themselves holding their phones with the Dokdo background.

That campaign will be wrapped up with a flash mob held by Vank, or Voluntary Agency Network of Korea, a cyber diplomatic organization in Korea.

Kim Jeong-gi, a cartoonist, uploaded a video clip on YouTube, showing a sped-up video of a drawing that depicts activist Yu brandishing the Korean flag in front of Japanese soldiers who are pointing their rifles at her and other protestors.

“After watching the video, someone told me, ‘I thought the March 1 Independence Day was just a holiday, but your video reminded me of the meaning of the day,’?” Kim told the JoongAng Ilbo.

Starting from 12:30 p.m., about 3,000 members of a youth association of the Institute for Traditional Korean Culture Studies, a civic group aimed to promote Korean studies and culture, will stage a large-scale flash mob, shouting “Independence of the Republic of Korea! Hurrah!” at Gwanghwamun Square, central Seoul, and 10 other cities nationwide, simultaneously.

“We have been carrying out a cyber campaign through social networking services to urge the public to hang national flags outside their houses,” Yeom Gyu-sik, a manager of the association, told the JoongAng Ilbo.

“This year, we expect about 10,000 people to set the image of Korea’s national flag as their profile picture on KakaoTalk.”