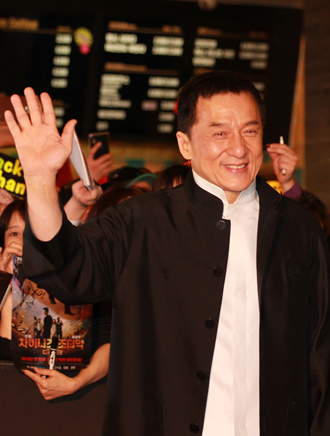 On a visit to promote his latest movie “Chinese Zodiac,” Jackie Chan reminisced about his days in Korea and an eight-year relationship he had with a woman here.

The international superstar lived in Seoul between the ages of 18 and 20, working as a stunt double before he rose to fame.

“I could have married her if it were easier to talk long-distance back then,” Chan said on MBC’s “Knee-Drop Guru.” “One day I got stuck at a nightclub because of the curfew, and while there, I fell in love with a woman at first sight.”

The two continued their relationship after the actor returned to Hong Kong.

“At that time, I had to go to a telephone office to call her,” Chan recalled. “I used to say ‘Honey, is it cold there? Kiss-kiss.’”

The couple eventually split up because of the distance.

“We parted ways because I was too busy and was on tight budget so couldn’t afford the international calls.”