Foreign companies can lease land to build plants in the Cheonan Foreign Investment District in South Chungcheong at prices amounting to 1 percent of the land’s assessed value as part of the government’s plan to promote foreign investment this year. [JoongAng Ilbo]


In response to the Park Geun-hye administration’s economic democratization initiative, foreign businesses are considering cutting back on investment in the country due to market uncertainties and tighter regulations.

The 2013 Investment Climate Statement, a report by the U.S. State Department released before the Park’s inauguration, found a growing uncertainty among foreign businesses about a changing investment climate under the new government of Korea.

“Park Geun-hye has pledged to promote ‘economic democratization,’ including strengthening regulation of family-run conglomerates [chaebol], increasing support for small and medium enterprises, and increasing social welfare spending,” the report said. “It is unclear at this point how such policies may affect the investment climate.” 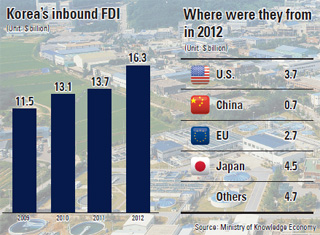 The report said both domestic and foreign businesses experienced “increased scrutiny” from regulatory agencies, including pressure to control prices, in the months prior to the December election.

Companies that benefited from Korea’s free trade agreements with the United States or European Union were asked by Korean government agencies to show how they decreased prices to reflect tariff reductions, it said.

In addition, tax authorities’ latest moves to scrutinize possible tax evasion among foreign businesses could be seen as a threat.

The National Tax Service (NTS) and Korea Customs Office have been closely monitoring non-Korean companies to expand the country’s revenue in line with Park’s major pledge to legalize the underground economy to finance welfare spending.

Renault-Samsung Motors, the Korean unit of French automaker Renault, has been under tense scrutiny since late last year and fined more than 70 billion won ($64.6 million).

According to the NTS, some foreign companies customarily lower the prices of goods or services to reduce revenue and pay less tax.

“It is important to create a favorable environment for foreign businesses to make investments in the country, but it is more important to eradicate such tax evasion practices by foreign companies,” said an NTS official.

The number of foreign companies under NTS scrutiny rose from 80 in 2012 to 130 this year, the official said.

The Korea Customs Office has increased its staff in order to monitor and inspect companies that falsely report lower import prices in order to pay less in tariffs.

According to a recent survey by the Korea Chamber of Commerce & Industry (KCCI), one in three foreign businesses in Korea, excluding the Seoul Metropolitan area, plan to reduce investment and employment this year.

Of 360 foreign companies, 36 percent said they will invest less than last year, and 39 percent of U.S. companies plan to do so.

About 5 percent of the surveyed companies cited the Park administration as a source of concern.

Against this backdrop, Korea’s capital inflow reached a record high last year. Foreign direct investment rose to $16.3 billion, up 19 percent from 2011, according to the Ministry of Knowledge Economy.

The United States has been the largest investor nation in Korea, accounting for 24.5 percent of total FDI. United States FDI has totaled $49.8 billion since the 1960s, followed by Japan ($32.8 billion) and the Netherlands ($21.7 billion). EU countries have invested a combined $67.4 billion.

The U.S. government also expressed worries about regulations that could discourage foreign investment.

“Unclear and opaque regulatory decision-making remained a significant concern, which can discourage FDI by creating uncertainty for investors and fostering an impression that Korea remains hostile to foreign investment,” the report said. “FDI in Korea is still at times subject to insufficient regulatory transparency, including inconsistent and sudden changes in interpretation of regulations, as well as underdeveloped corporate governance, high labor costs, an inflexible labor system and lingering economic domination by chaebol.”

“Although Korea is becoming an appealing destination for foreign businesses, owing to the upgraded credit level and moderate economic growth, foreign businesses tend to avoid making aggressive investments because of inconsistency in regulatory moves,” said an official at the KCCI.

In another survey by the KCCI, seven of 10 foreign companies said they might leave Korea, if the new government raises taxes.

About 70 percent of 160 foreign businesses in the country said they are considering pulling out of the Korean market due to higher corporate taxes. They also expressed opposition to reducing tax exemptions for R&D investments.

“The U.S. State Department probably pointed out general hurdles that its companies face in another country,” said Jeon Yoon-jong, a director at the Foreign Investment bureau in the Knowledge Ministry. “For example, the retail industry development act enacted last year to protect mom-and-pop stores could be seen as an unexpected change in the regulatory aspect. U.S.-based Costco took issue with the act.”

The government is preparing a package of incentives, including cheaper land lease contracts for foreign businesses in provincial areas like the Cheonan Foreign Investment District in South Chungcheong.

“The Korean government will focus on attracting foreign investment that could create high-quality jobs regardless of size,” Jeon said. “Foreign companies that want to build facilities in non-Seoul areas will be provided with incentives.”