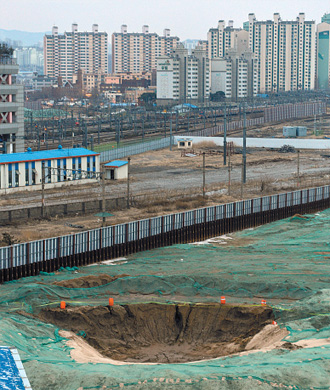 This image taken Thursday shows a plot of land in the Yongsan Station area of central Seoul that is part of the Yongsan International Business District project. Korail will bring an additional 4 trillion won (3.69 billion dollar) to increase total capital to 5 trillion won. [NEWSIS]

The stalled project to turn the Yongsan Station area in central Seoul into an international business district has entered a new stage as Korail, the largest stakeholder, unveiled a plan to increase its capital for the project this week.

At a meeting of the project’s stakeholders Thursday, Dream Hub Financial Investment, a special-purposed company in charge of the development project, said Korail will bring an additional 4 trillion won ($3.69 billion) to the table to increase total capital to 5 trillion won.

The Yongsan International Business District is Korea’s largest development project and is worth 31 trillion won.

The whole project has been estimated to have an economic impact of 82 trillion won and create 400,000 jobs.

Korail also demanded that 29 private investors proceed with the project according to a phase-by-phase plan and that Lotte Tour & Development relinquish its position as the second-largest stakeholder.

Lotte Tour agreed and stepped out of the project, adding that it will pass its 45.1 percent stake to Korail. The other private investors also signed on to the proposal.

The decision came amid concerns about Dream Hub’s possible bankruptcy. The company must pay 5.9 billion won in loan interest by March 12.

Under the agreement to raise 5 trillion won, private investors should finance 1.4 trillion won as part of the agreement with Korail. But except for Lotte Tour, no company appears to be able to invest the money due to worsening market conditions and falling profitability of the project stalled since 2006.

Samsung C&T is said to be the only stakeholder financially capable of executing the plan, and the company said it will have to thoroughly consider the matter.

“Even if Samsung C&T opts for helping the capital increase, it won’t do it alone,” an official at the company said. “All the other investors should share the burden.”

If Korail’s proposal is fully accepted by investors, the Yongsan International Business District is likely to end up being a public project.

While Korail wanted an incremental development over 560,000 square meters (138.4 acres) in Yongsan that includes a 150-story high-rise, Lotte Tour and other private shareholders wanted to make it an integrated development project.

“It is almost impossible for a private company to make an investment of more than 1 trillion won in this economic downturn,” said an official at Dream Hub. “If Korail keeps insisting on the aforementioned conditions, Dream Hub is highly likely to go bankrupt.”