Boxer fighting for all Afghan women

Boxer fighting for all Afghan women 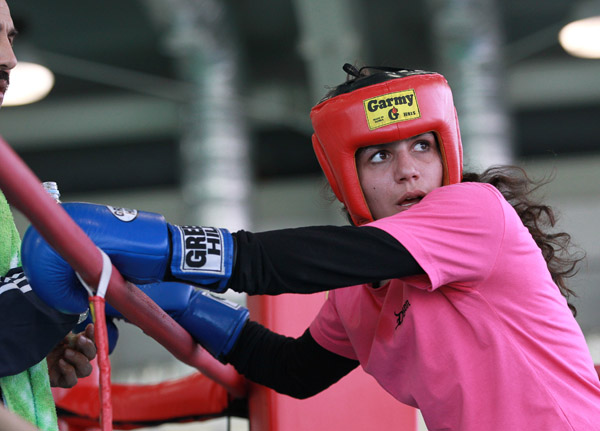 Shabnam Rahimi eyes her sparring partner at the Taeneung National Training Center in Seoul on Feb. 18. The Afghan boxer is aiming for the 2014 Incheon Asian Games. By Lee Ho-hyung


Once ruled by the Taliban, Afghanistan is not exactly the ideal place for women to pursue their dreams. The Islamic fundamentalists’ brutal regime, which lasted from 1996 to 2001, stripped women of their rights to education and employment, and that influence can still be felt in Afghan society. Women continue to encounter formidable gender barriers.

Shabnam Rahimi is one of a small group of women bravely challenging those barriers - by boxing. The 20-year-old came to Korea along with her team at the invitation of the Olympic Council of Asia for a month at Taeneung National Training Center in northern Seoul. The session lasted from Jan. 24 until Feb. 21, and the JoongAng Ilbo spoke with her on Feb. 18.

“Boxing is indeed a challenging sport,” said Rahimi, who first put on gloves in 2009. “If it weren’t for family support, I would not have been able to keep boxing to this point.”

She said she steps into the ring to show the world that “Afghans, especially women, are capable of accomplishing something for their country.”

“I want to prove that women are not dependent and are not weak,” she said.

Rahimi is determined to overcome deep-rooted prejudice and discrimination against women in her homeland, but the political situation in Afghanistan remains unstable. Taliban threats continue, especially with the United States’ timetable for completing its military withdrawal by the end of 2014.

When asked about the possibility of the Taliban returning to the capital of Kabul, Rahimi shook her head.

“I don’t even want to imagine what that would be like,” she said.

There have been reports of death threats against the families of women boxers from people with ties to the Taliban or other Islamic fundamentalist groups.

During the Taliban’s five-year reign, they imposed strict Islamic law and Afghan women couldn’t leave their homes without wearing a burka, a black head-to-toe covering. Even with the group’s downfall, women still risk their personal safety when they opt to walk on the streets in Western-style clothing. In Kabul, about half of women still don a burka, but not Rahimi.

“I have never worn and will never wear a burka,” said the stern-looking boxer.

Kim Won-chan, coach of Incheon City Office’s boxing team who helped arrange the training schedule with the Afghan team at the national sports center, said the Afghans reminded him of “Korean boxers in the 1950s and 1960s.”

“It’s like watching Korean boxers who didn’t have enough food to eat, but whose willpower was so strong. The Afghan boxers are mentally stronger than ours.” The Korean coach added that Rahimi could have a chance for a medal in the 2014 Incheon Asian Games.

No Afghan woman has ever won a medal at either the Olympics or Asian Games.

To Rahimi, just stepping into the ring in Incheon in two years will be a significant accomplishment.

“It won’t matter whether I get a medal. Participating in the event representing Afghanistan will be a huge step.”