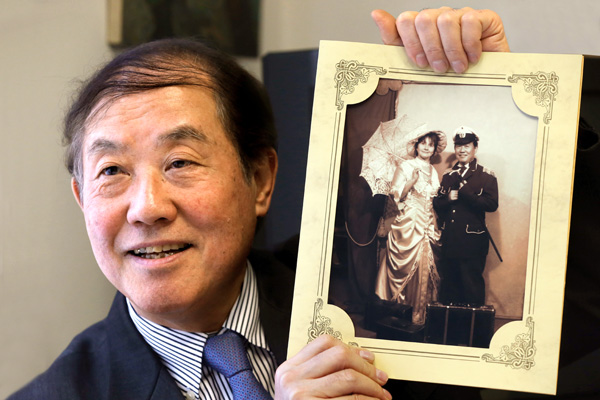 Doe Phil-young, who served in the German Embassy in Seoul for over 40 years, shows a photo of himself wearing German garb and standing with a former communications counselor, left. The press officer recalls the two clashed frequently, but when he visited her in Germany several years later, she opened her arms and said, “We are friends.” By Kim Hyung-soo


Any Korean reporter who has ever covered a story about Germany has likely met the press officer who devoted the past four decades to the German Embassy in Seoul.

Now 66, Doe Phil-young has served 11 German ambassadors under five presidents and five chancellors since 1972. He also assisted eight Korean presidents - from the late President Park Chung Hee to his daughter, the newly inaugurated President Park Geun-hye - in liaising with Germany.

Last month marked exactly 41 consecutive years that Doe has worked for the German Embassy. He received a medal on his 40th anniversary for his contributions to the embassy. Then-German Ambassador Hans Ulrich-Seidt requested he stay another year.

But last week, Doe told his colleagues that he has decided to head off and try something new.

“While I was working, I believe nothing went especially wrong, but when composer Yun I-sang and Professor Song Du-yul were in delicate standing between the two countries, I broke out in a cold sweat,” said Doe.

“And my shoulders were raised with pride when video artist Paik Nam-june, like composer Chin Un-suk, became recognized for spreading Korean culture in Germany.”

The late Yun, a well-known composer, and Song, a professor of philosophy at University of Munster, are both South Koreans who became German citizens and were later prosecuted in the South for alleged pro-North activities. Song is in political exile in Germany. Paik, a Korean-born avant-garde artist, musician and video art pioneer who died in 2006, met many artists who influenced his work when he went to Germany to study music. Chin is an award-winning composer and recipient of the Arnold Schonberg Prize and was likewise born in Seoul. He’s now based in Berlin.

“As a media officer, the highlight was 1989 and 1990. The Berlin Wall came down, the following year East and West Germany unified, and the Korean press competed to get interviews,” he said. “There were several times that I felt emotional seeing our reporters, who seemed even more moved and overjoyed than the Germans themselves.”

“I especially wish [Koreans] could learn Germans’ sense of responsibility to do their best in whatever position they find themselves.”

Recalling past years and how he feels about the younger generation of officers, Doe said, “It’s wonderful to have more female colleagues, but I hope my male colleagues will try hard too.”

As to what he plans to do now, he said, “NGOs and other places have requested assistance, so I’m planning to make good use of my 40 years of experience.”

A party for Doe was held on Wednesday.