‘Give up on Pyongyang,’ says China insider

‘Give up on Pyongyang,’ says China insider 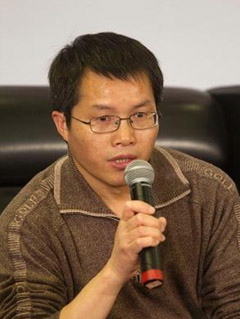 A core architect of China’s ruling party says “Beijing should give up on Pyongyang and press for the reunification of the Korean peninsula,” contrary to the Chinese government’s refusal to take further sanctions against its ally.

Deng Yuwen, deputy editor of Study Times, the journal of the Central Party School of the Communist Party of China, writing Thursday in the Financial Times, said, “China should consider abandoning North Korea. The best way of giving up on Pyongyang is to take the initiative to facilitate North Korea’s unification with South Korea.”

After his opinion piece was published, he talked with the JoongAng Ilbo on Thursday, saying reunification should be led by South Korea.

The Central Party School is a state-controlled institution to educate power elites of the ruling party. Xi Jinping, secretary general of the Communist Party, was president of the school for five years until 2012.

Deng is known as a prominent liberal in China, who is leading a study of national reform and improving the social system. In 2012, Deng wrote an article saying the ruling party and system of Chinese government needed to change.

In the Financial Times article, Deng cited several reasons why China should end its support of North Korea: a relationship based on ideology is dangerous; North Korea’s strategic importance has eroded; North Korea is taking advantage of China; North Korea will never reform; and that a nuclear North Korea could be a serious threat to China’s national security.

Q. Your article in the Financial Times contained such new and surprising positions. Do they reflect the ruling party’s thinking?

A. It is entirely my own opinion.

Did the Financial Times ask you to write an article?

I contributed it to the Financial Times by myself. ‘

Is there someone in the ruling party who has similar opinions?

I don’t know. There could be.

In your article, you didn’t mention how to achieve unification.

Of course, it is unification led by South Korea. But in order to do that, we need two conditions, which are securing the safety of the ruling groups in North Korea and removing U.S. troops stationed in South Korea. If these matters are discussed during the process of unification, I think there would be no reason for China to oppose it.

There has been some movement for change in North Korea under the rule of Kim Jong-un. What do you think it means?

Basically, the North Korean regime exists to maintain the Kim dynasty. North Korea’s ruling group is clearly aware that if the regime reforms and opens up to the world like China, it will collapse. Leaders of North Korea know it well. So it can never reform or open up on its own. Unification could resolve all of the problems, including the North’s nuclear program.

But the Chinese government wants to resolve it through six-party talks, right?

Will there be any policy changes toward North Korea under Xi Jinping?