K-League kicks off with wins by Jeonju, Suwon

K-League kicks off with wins by Jeonju, Suwon 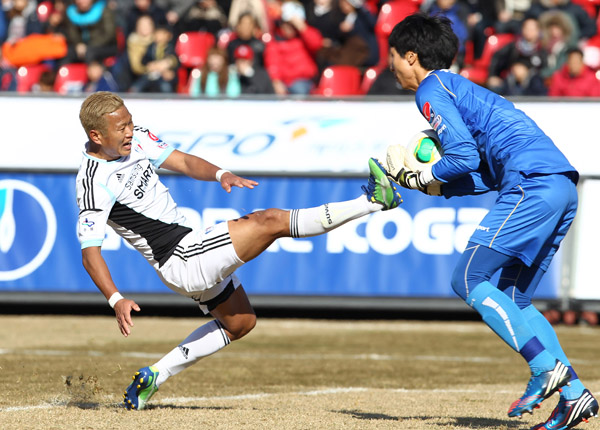 The Jeonbuk Motors, Suwon Bluewings and Ulsan Hyundai charged ahead as the Korea’s top professional football league kicked off its new season under the new name K League Classic over the weekend.

The Motors, the runners-up in the 2012 season, thrashed Daejeon Citizen 3-1 in Daejeon yesterday after the defending champions FC Seoul drew with the domestic players-only Pohang Steelers 2-2 in Seoul on Saturday.

The Bluewings, who finished fourth last season, beat Seongnam Chunma 2-1 in their opener of the K League Classic in Seongnam, Gyeonggi, yesterday. Ulsan Hyundai, the winner of the 2012 Asian Football Confederation Champions League, came from behind to defeat Daegu FC 2-1 at home on Saturday.

At the Daejeon World Cup Stadium, Lee Dong-gook extended his league record of the most career goals to 142 as the 33-year-old striker doubled the visitors’ lead in the 37th minute after Leonardo Rodrigues Pereira’s sixth-minute goal. Kevin Oris made it to 3-0 in the 68th minute before Jeong Shung-hoon reduced the deficit for the Citizen in the 86th minute.

In Seongnam, Seo Jung-jin, a five-year midfielder, scored one and set up another, giving the first victory for the Bluewings coach Seo Jung-won.

Seo, 23, put the Bluewings on the scoreboard in the ninth before Hwang Ui-jo equalized for Chunma in the 22nd minute. Cho Dong-kun, who moved from Seongnam to Suwon during the 2012 season, sank his former team with the winner in the 72nd minute.

At the World Cup Stadium in Seoul on Saturday, the host team went ahead first on collaboration between the “Demolition Duo” of Montenegrin striker Dejan Damjanovic and Colombian midfielder Mauricio Uribe, or Molina as he is called here. Damjanovic scored in the 29th on a cross from Uribe.

Shin Jin-ho made it even in the 32nd minute, but Seoul began to lead again on Sergio Escudero’s goal two minutes into the second half. Lee Myung-joo earned a point for the Steelers with his 78th-minute equalizer but failed to snap the team’s 10th straight winless streak at Seoul.

At Munsu Stadium in Ulsan on Saturday, Daegu FC rookie forward Han Seung-yeop got the visitors to lead with his midrange shot in the fourth. Ulsan Hyundai managed to hit back only at the end of the game, with Kim Chi-gon’s equalizer in the 89th minute and Kim Shin-wook’s go-ahead goal in the second stoppage time.