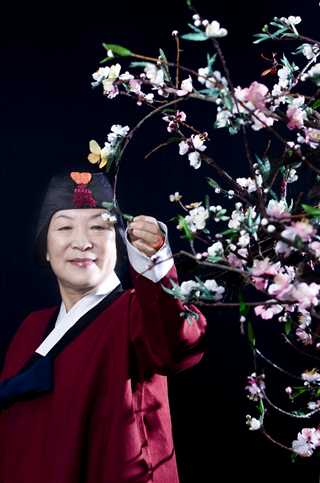 Hwang Su-ro poses with some of her flowers. The tricolor plum blossom decorations used to be put near the Joseon king’s throne. By Kwon Hyuk-jae

As a young girl, Hwang Su-ro always enjoyed the stories about flowers that her father and mother told her.

Her father was one of the Joseon Dynasty government officials who oversaw state ceremonies. Her mother helped him - oftentimes getting silk and ramie, dyeing them and making flowers out of them.

Hwang is now 78 years old, but her memories of the stories of gahwa - the fake flowers - are still as vivid as if she heard them last night.

She kept the family passion for gahwa alive, becoming a master of the Joseon art. In late January, the Cultural Heritage Administration designated her No. 124 on Korea’s Intangible Cultural Heritage list, which recognizes people who keep traditional skills alive.

“According to the records, during the Joseon Dynasty there were dozens of artisans who specialized in flowers,” Hwang said in a recent interview with the JoongAng Ilbo. “However, the flowers were discarded after the events finished, so there are no relics left. And after the Japanese colonization [1910-1945], the legacy of gahwa creation disappeared.”

Hwang says the Joseon artisans had a good reason for using fake flowers instead of real ones. “Flowers were everywhere and readily available at the palaces during Joseon,” Hwang said. “But the Joseon artisans never picked live flowers and decorated the court with them due to their respect for life. Instead, they made flowers using materials that were close to nature. Besides silk, they used ramie, paper, tteok [rice cakes], or even ice.”

The dyeing process was also eco-friendly. Artisans used materials like safflower, gardenia seeds and mugwort to color their creations. Using iron, they created each petal for a wide range of flowers such as magnolias and roses. Afterwards, to make the colors last, they laminated them with refined wax.

The petals - sometimes dozens, sometimes hundreds - were put together one by one using ramie string or roe deer hair. “For the stamens, we use real pollen,” the artisan said. “We mix the pollen with honey. This is why the fake flowers sometimes attract butterflies and bees.”

The Yi Family that ruled the Joseon Dynasty for 500 years used the plum blossom as its symbol, and as such that flower was the most recreated of the era.

While Korean history and flowers have been Hwang’s fields of study from early on, an encounter in the early 1960s motivated her to delve more deeply into the gahwa of the Joseon court. On a visit to Japan she met a florist who told her, “The centuries-old tradition of flower craftsmanship exists only in Japan.”

“Is that so?” Hwang thought to herself at the time. “I’m going to prove that Korea also has a quintessential flower culture.” This national pride is part of what drove her to become the renowned artisan she is today.

Hwang says if it weren’t for the “Uigwe,” it would have been impossible to recreate and promote the gahwa of Joseon court, as knowledge about them was limited. The “Uigwe” are books that detail the protocols for Joseon Dynasty royal ceremonies and rites in exquisite drawings and text. While studying Korean history at Dong-A University for her master’s and doctoral degrees, she poured over the in-depth information in the “Uigwe” about gahwa.

But despite all of the evidence in the records, Hwang had trouble convincing people about gahwa. “Even though I showed people the drawings in the ‘Uigwe,’ many of them just said, ‘Since it’s the royal court, they must have used real flowers.’?”

She managed to clarify the situation by explaining they couldn’t possibly have been real, as a drawing of a single event contains magnolias, which bloom in spring, lotuses that bloom in summer, and chrysanthemums that bloom in fall.

Because there were no experts in the area, it took a long time for Hwang to be added to the Intangible Cultural Heritage list. In 2006, she set up a research institute dedicated to the Joseon court gahwa. Today, she has about ten students.

“I’m relieved that, although it’s a little late, we established a foundation to carry on the traditions and the legacy of the Joseon court flower culture,” Hwang said. At present, she is working on a rose of Sharon (the national flower) to be displayed at a furniture expo in Milan in April.

Hwang’s real name used to be Eul-sun, but she changed it to Su-ro after Lady Suro, who appears in a Silla-era poem. In “Flower Dedication Song,” presumed to be written in the 8th century, Lady Suro, the wife of Silla official Sunjeonggong, is amazed by the beauty of royal azalea blossoms on a rocky cliff and asks if anyone is willing to bring her one. Because they were just out of reach, most of her maids and servants refused. But an old man passing by picks the flowers and gives them to her along with the song.

“Lady Suro is the first woman that appears in Korean historical documents who loves flowers,” Hwang said. “I consider it a blessing to spend my lifetime with beautiful flowers.”