In its final years and desperate to protect its sovereignty, the Joseon Dynasty briefly transformed into an empire, complete with majestic titles and ornate equipment.

The royal family of the Joseon Dynasty declared themselves emperors and empresses, and King Gojong (1852-1919) himself took the title.

But though it took on a new, more powerful name, the Daehan Empire (1897-1910) did not acquire the military prowess it needed and fell to Japanese imperialism.

Its legacy today is largely made of the helmets and armor produced for army generals and emperors that, though largely unused, impress with their sturdy yet exquisite design. 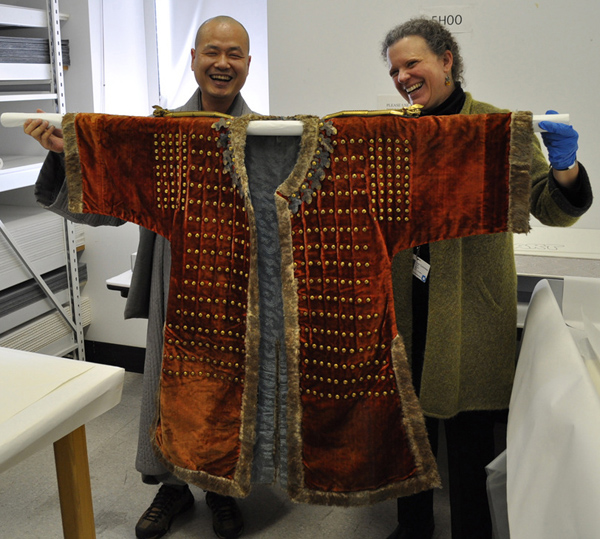 Armor kept at the Brooklyn Museum in February. Provided by Newsroh.com

Yet none of the known pieces are currently in Korea and instead are held by foreign museums in Japan and the United States. Korean historians have very few details about their pieces, and so Lee Won, a descendent of the Daehan Empire’s ruling family, had much to be excited about when allowed a viewing at the Tokyo National Museum. As president of the Imperial Household Culture Center, he was permitted to see the helmet and armor of Emperor Gojong, his great-grandfather.

Korean cultural authorities learned about the helmet and armor at the museum in the 1960s and Korean civic groups like the Committee for the Return of Korean Cultural Property, led by Buddhist monk Hye Moon, have been pushing for their return ever since.

After years of protests, the museum finally allowed Lee to view the pieces in February, though photography was not permitted and there were other conditions.

“It’s clear that the helmet and the armor were from the Korean empire as they used the patterns of plum blossoms, the national flower,” Lee said after the visit.

Clearly moved by the experience, he asked, “Why are these artifacts in Japan when there are none in Korea?”

Meanwhile, Hye Moon was permitted to see a separate artifact in the United States. The activist, who played an instrumental role in France’s return of the Uigwe books on royal protocol, learned about an emperor’s helmet held at the Brooklyn Museum a few years ago.

From 2009 he made three separate requests to see it, but they were all denied. Then last month, he was introduced to Joan Cummins, the curator of Asian art at the museum, through an acquaintance. She finally approved the request.

“Because there are few records on the imperial helmet and armor and no physical artifacts that survive in Korea, I had only imagined it in my head and kept it in my heart,” Hye Moon told local news agency Newsis. “They look just as I imagined and I am absolutely thrilled.”

In total, there are three sets of helmets and armor at the Brooklyn Museum, with one presumably belonging to an army general.

They feature phoenix patterns, the symbol the emperor, dragons, haetae (a legendary fire-eating animal), vines, flowers and the character for virtue.

It is unclear whether any of the pieces held in Japan or the United States will return to Korea for an exhibition, on loan or permanently.