Real estate boost on back burner

Real estate boost on back burner 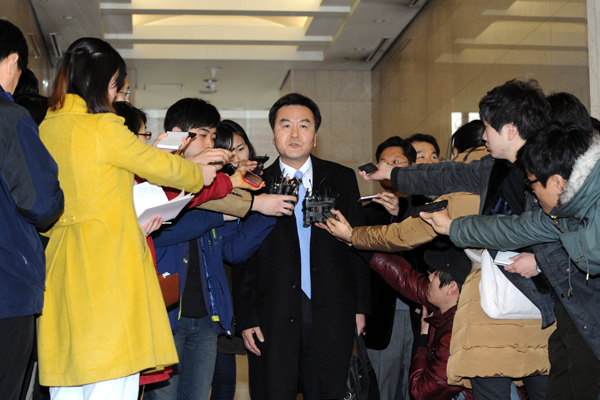 The comment is considered a sign that the administration will prioritize dealing with the record level of household debt over stimulating the real estate market.

On the flip side, it could have a negative effect if homeowners burdened by debt start selling off their properties at much lower values. This could also cause consumers to reduce their spending and hurt economic growth.

Shin Je-yoon, the new chairman of Financial Services Commission (FSC), on Saturday said, “For now I am not considering [easing] the loan-to-value [LTV] ratio or debt-to-income [DTI] ratio regulations.”

However, he said he will continue to think about the issue as revitalizing the real estate market, and the soundness of financial institutions are closely connected.

The comment from Shin came as a surprise to the market, which until recently had been hoping the new administration would roll out policies to stimulate the real estate market.

The market has been in desperate need of some indication that the government would take action as the real estate market has stalled after briefly recovering in the fourth quarter of 2012 on the strength of a temporary tax ease that expired at the end of the year.

The most likely action that discussed in the industry was easing on housing related loan regulations, namely the LTV and DTI.

The LTV and DTI were effective tools in cooling the heated housing market here in the mid-2000s.

The loan regulations were tightened under the Roh Moo-hyun administration as housing prices soared, especially in the posh neighborhoods in Gangnam because of speculators who were taking out excessive loans to purchase multiple homes.

During the Roh government from 2003 to 2008, housing values in Seoul surged 78.7 percent while the metropolitan area saw values go up nearly 63 percent.

Since 2008, however, the tide completely turned around. Housing prices started to fall as the government’s strong regulations started to take effect, while the global crisis that started with the bankruptcy of Lehman Brothers crippled the domestic market, with consumption falling rapidly.

Housing values today compared to five years ago have fallen more than 3 percent in Seoul alone. In the Seoul metropolitan area they have retreated nearly 6 percent.

As housing prices started to fall, transactions ground to a near halt. In 2006 when the real estate market was at its peak, more than 690,000 apartments were sold. Last year that figure dropped by a third to 270,000. Additionally, at the end of last year unsold apartments across the country amounted to more than 740,000 units.

The sluggish real estate market is not only a threat to the industry but also a risk to the financial industry, especially as household debt is at a record level of nearly 960 trillion won ($885 billion). By the end of this year, it could reach 1,000 trillion won.

Not only industry insiders, but also the state-run think tank Korea Development Institute (KDI), have been advising the government to consider changing loan regulations.

“The total housing value nationwide as of end of 2011 was roughly estimated around 4,700 trillion won, which is equivalent to four times the nation’s gross domestic product,” said Song In-ho, a KDI researcher. “The housing market is struggling exceptionally as the number of transactions last year fell to the lowest since 2006.” Song said any additional drop in housing prices will lead to bigger debt repayment burden to homeowners, which could lead to selling house at bargain prices. The sharp increase in apartment sales for far below their value could trigger a nationwide fear.

Song said that as the impact of falling housing prices could have a huge impact on the larger economy, one of the first steps that should be taken is easing various regulations that were adopted in the mid-2000s during the heated market, including the DTI and LTV ratios.

A separate KDI report suggested easing the ratio on LTV by as much as 80 percent.

Currently in Seoul and the metropolitan area, for apartments whose value is less than 600 million won under the LTV regulation, the borrower could take out as much as 60 percent of the apartment value in a loan. For apartments that exceed 600 million won, that ratio falls to 50 percent.

Under the DTI regulation, those who are asking for loans could take out between 30 and 60 percent of the apartment value depending on their income.

Market experts say the expired temporary tax exemption on apartment transactions is unlikely to be reinstituted anytime soon largely due to protests by local governments that such taxes are their main revenue, and the plausible solution is the loan regulation.

For the new FSC chairman, the biggest concern regarding tampering with loan regulation is the ever growing debt, which has been dubbed a ticking time bomb.