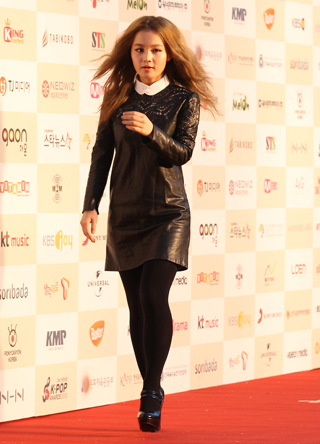 Leading up to Lee Hi’s first mini album, YG released the intro track, “Turn It Up,” on Friday along with a third teaser image on its blog the next day.

Ahead of the new teaser, YG triggered netizens’ curiosity by uploading the first teaser that read “March 1?” “March 7?” and “March 21?”

The March 1 event turned out to be a release of the intro track through YG’s official blog and YouTube, where it has received more than 740,000 views, fast approaching the million mark. Tablo of Epik High wrote the lyrics for “Turn It Up,” which talks about Lee’s journey from the competition show to the intense training at YG.

In the new teaser image, 16-year-old Lee is seen applying red lipstick while wearing lashes in the shape of musical notes, signaling the growth into maturity of the not-yet-legal musical talent. What is fueling more buzz in the virtual sphere is a phrase “It’s Over” written in red lipstick, raising speculation as to what Lee could be implying. Stay tuned to see what she will bring on March 7 and 21, the other days YG specified in previous teaser images. By Ahn Joo-hee