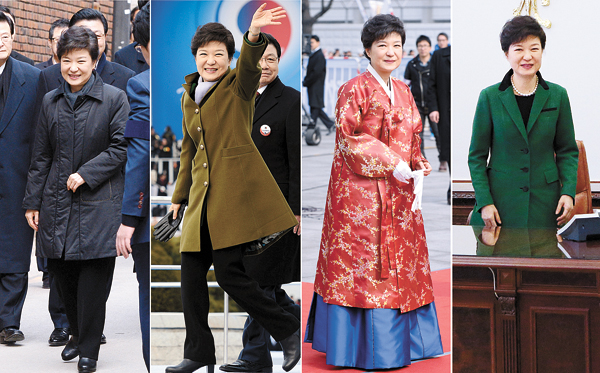 Since Park Geun-hye won the presidential election, her clothing choices have drawn increased attention from fashionistas and political observers alike. Pictured above are the four outfits she wore to Inauguration Day events on Feb. 25. She is known for wearing brooches to accent jackets, right, that subtly highlight her waistline. [Joint Press Corps]

With Korea’s first female president, some people are as interested in the dresses she puts on and the bags she carries as they are in how she runs the country.

On the day of the inauguration, she wore five different outfits. The Korean media splashed their pages with headlines like “The meaning behind Park Geun-hye’s clothes” and “Five-color fashion politics of Park Geun-hye.”

Other phrases like “style politics” and “fashion politics” were not hard to find. 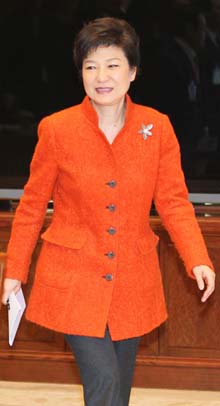 So despite some criticism from political analysts, those conscious of gender equality issues and some members of the liberal camp, it’s clear that Park’s every fashion choice will be scrutinized.

Some criticism is valid, but it’s likely that Park will face nitpicking if she wears cheap or expensive clothes, whether or not she cares too much about her fashion or neglects it altogether.

The Korea JoongAng Daily also looked at the fashion of Korea’s new president, what messages political observers are reading from it and why it’s making headlines.

Experts in the fashion world say that Park sought to convey the messages of “patriotism and national defense” on inauguration day, without deviating too much from the style she’s been maintaining since she entered politics in 1998.

It was modest, with a slightly feminine look.

In the morning, she wore black outerwear, black pants and a charcoal scarf, appropriate for paying respects to the deceased heroes and leaders of the country at the National Cemetery.

She then changed to olive green outerwear with gold buttons and black pants with brightness added via a light violet scarf and violet brooch at the ceremony in front of the National Assembly.

“The color coordination of olive green and light violet was refined, conjuring up the painting of Sin Saimdang [1504-1551, a renowned female painter],” Gan Ho-seop, a fashion design professor at Hongik University, told Korean media. Many assessed that the green gave a sense of comfort and ease to onlookers while the butterfly-shaped brooch symbolized hope for better days.

Another highlight was the deep red-and-blue hanbok, or traditional Korean clothing, she wore for the ensuing event at Gwanghwamun Square.

“I think it was by far the most successful choice of clothes in her political career,” evaluated Ha Ji-soo, a clothing and textiles professor at Seoul National University. “It makes people immediately think of the taegeuk from the Korean flag.” Taegeuk represents yin and yang and the balance of things.

For the celebrations at the Sejong Center for the Performing Arts, she again brought out the green, changing to a kelly-green jacket with black velvet collar, black pants and pearl necklace, which was a lot of decoration for her given that usually the only accessory Park wears is a brooch.

At the dinner, she again changed to hanbok - a deep red with burgundy for the bow on top and bottom hem of the skirt. Burgundy is used to express dignity in Korean costumes.

But there were some fashion critics that didn’t like the red-and-blue hanbok, saying that it could have been more subtle.

Style remains, so does criticism

The features include a waistline that subtly highlights the waist, a length that hides the bottom and a slightly elevated collar. Fashion critics read messages like “moderation” and “credibility” from such features.

Other styles of Park that she has continuously displayed include the brooch on the left chest, straight pants and black shoes with four- to five-centimeter (1.6- to two-inch) heels, which all seek to appeal a sense of neutrality and stability.

In terms of color, Park was known to prefer neutral colors, mostly to be taken seriously in politics.

But that changed as the ruling Saenuri Party went under an image makeover and adopted red as its color.

She started accentuating her looks with a red scarf during the campaign. People got to see even more color from Park after she won the presidential election as she began wearing more bright colors like fuchsia.

Park is not yet a style icon, yet the things she wears are selling like hotcakes.

In early February, Park was seen carrying a gray ostrich leather bag, which some people suspected to be from luxury Korean brand Hormiga at a price above 1 million won ($923.45). As speculation mounted, Park’s officials explained that the bag was not a Hormiga but made by a small firm whose name is not yet known.

In the meantime, sales of Hormiga have soared.