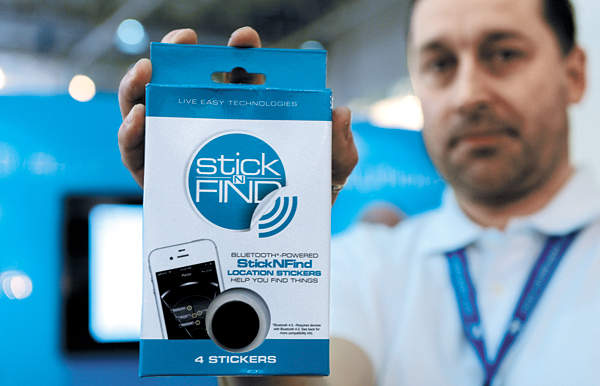 Stick-N-Find Technologies showcased its products at the Mobile World Congress in Barcelona. The company wants to give people a way to find things by using a new radio technology known as Bluetooth Low Energy, which drastically reduces the power consumption of transmitting devices. [AP/NEWSIS]

On the floor of the world’s largest cellphone trade show in Barcelona, Spain, he’s looking at the screen of his iPod Touch, taking a few steps, and then looking again. Now and then he backtracks or turns, and looks again. Slowly, he confines his movements to a smaller and smaller area. Then he drops to his knees, and checks the screen again. He scrabbles forward.

Buchheim has found his keys, which had been hidden behind a wastebasket by a skeptical reporter. On the key ring is a small disc, slightly bigger than a quarter. That’s what Buchheim was homing in on, with his iPod. It allowed him to find his keys, hidden out of sight in an apartment-sized booth.

There’s no real trick to sending out a radio signal and having a phone pick it up. That’s been done before. What makes the Stick-N-Find practical is a new radio technology known as Bluetooth Low Energy, which drastically reduces the battery power needed to send out a signal. That means the disc can be small, light enough for its sticky back to adhere to a lot of surfaces and be powered by a watch-type battery that lasts up to two years. The signal can be picked as far as 300 feet away, but that’s under ideal circumstances. On the floor of the wireless show, with a multitude of Wi-Fi transmitters jamming the airwaves, the range was roughly 20 feet.

One downside to Bluetooth Low Energy: It doesn’t come cheap. Stick-N-Find charges $50 for two “stickers” from its first production run, which starts shipping next week. It gave early backers a better deal - four discs for $65 - on crowdfunding site Indiegogo, where it had sought to raise $70,000 from donors and ended up getting $931,970 by the time the campaign ended last month.

Another downside is that few devices can pick up the signals. The latest two iPhones can do it, as can the latest iPod Touches and iPads. The latest high-end Samsung smartphones work, too. Bluetooth Low Energy is expected to become a standard feature in phones, but it’s not there yet.

Whatever device you use, it won’t tell you exactly where your sticker is located. All it can tell is how far away it is. That means finding something is a process of walking around and checking whether you’re getting “hotter” or “colder.” Of course, often you don’t really need to know where your wallet is: knowing that it’s within 8 feet and therefore somewhere in the car with you is assurance enough. Buchheim says the company has plans to add direction-finding features.

Users can also set up a virtual “leash” between a sticker and a Bluetooth device. Depending on the settings, when the two devices move a certain distance away from each other, the sticker starts beeping or the device’s screen shows an alert. That way, you could use a sticker in your wallet, linked to your phone, to let you know if you’re leaving either one behind.

Buchheim sees this as just the start for what Bluetooth Low Energy can do. Stick-N-Find is working with a museum that’s interested in putting stickers on its exhibits, so they can issue tablets or other devices to visitors that can sense the proximity of exhibits, and say “Hello, this is the statue of so-and-so,” Buchheim says.

It could even end up as a technology for the blind - one that tells them where their belongings are, he says.